Slight improvement in former prime minister's health but end clearly in sight. 'We're treating him with lots of love and support, but there's not much we can do,' hospital says

"Our fighter Arik Sharon is continuing to fight for his life," he said at a press conference, adding that the former prime minister's status is still critical, but doctors were able to stabilize his blood pressure and pulse. Other organs in his body, however, were not functioning, he said.

Sharon is fighting "against all odds," the professor said.

"As of now, his family and children are by his side, and we are continuing to treat him as before," he said. "His organs haven't resumed function – and I'm not sure if we've improved the situation in his kidneys. We're treating him with lots of love and support, but there's not much we can do." 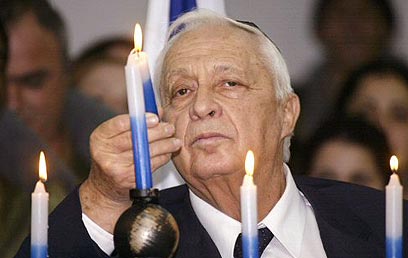 Rotstein was also quick to point out that despite the slight improvement, Sharon was still in immediate danger.

"I can't say I'm optimistic, maybe I'm a bit more pessimistic than I was before," he said. "We always knew that he had a good heart, and now we know that he has a strong heart."

About a month ago Sharon's condition worsened, and he was taken to emergency surgery and stabilized, but in the past few days another troubling deterioration in his condition was noted.

On January 4, 2006, just days after returning as prime minister, he suffered another critical stroke and was once again admitted to hospital. His responsibilities were transferred to then Deputy Prime Minister Ehud Olmert, who later became acting prime minister.

The first operation on Sharon's brain was conducted by four senior Hadassah doctors. Though they managed to stop the internal bleeding in his brain, his condition continued to deteriorate while still admitted in the intensive care unit at the Department of Neurosurgery. During the entire time, Sharon's sons and closest advisers were with him at the hospital. The president, rabbis, politicians and world leaders all prayed for his health.