African asylum seekers in Israel took the streets of Tel Aviv for the second consecutive day Monday, while Interior Minister Gideon Sa'ar lashed out the eateries who are their main source of employment, telling Ynet that restaurant and cafe owners will not dictate government policy.

Some 3,500 asylum seekers set out Monday morning from Levinsky Park in south Tel Aviv, where many live. Some 2,000 were heading for the US Embassy, and the rest planned to demonstrate in front of several other embassies, including those of Romania, Sweden, Italy, Canada, England and France, as well as the United Nations High Commissioner for Refugees (UNHCR).  The protesters aimed to ask the foreign embassies for help in dealing with what they call "the firm hand of the Israeli government."

At the US Embassy, the marchers handed Ambassador Dan Shapiro a letter outlining their requests. In the letter, they asked Shapiro to help influence Israeli decision-makers.

"We asked for them to cancel the law that puts us in jail and doesn't recognize us as refugees," one of the representatives said. 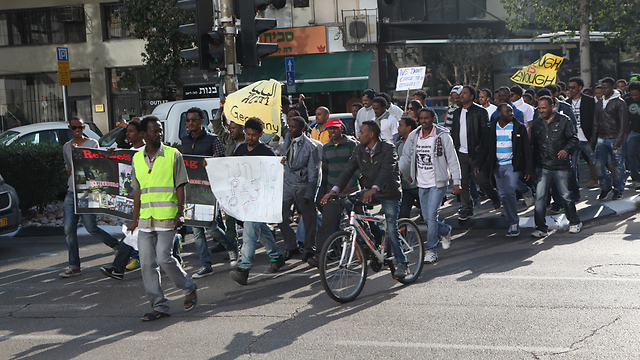 "The cries of the restaurant owners over the dishes in the sink will not determine Israel's policy," said Sa'ar. "I am not very impressed." He said that asylum requests from Sudanese and Eritrean citizens were under review, but, he declared, "most of them aren't refugees."

The demonstrators were also calling for the intervention of the international community.

"I came here so that the world would care and I would be treated like a human being," said Ibrahim, a Sudanese asylum seeker. "Since I got here three years ago, my (asylum) application was never examined. They keep extending our visas and not letting us live in dignity. We are in despair because of this treatment; we didn't come here for no reason, we are only here because our countries have rough wars." 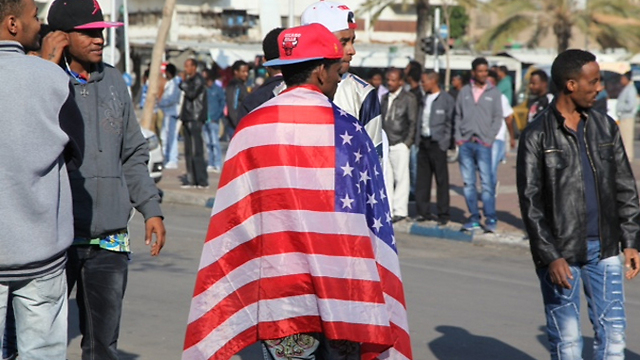 Asylum seekers on the way to the American Embassy (Photo: Motti Kimchi)

On Sunday, tens of thousands of asylum seekers took part a mass protest in Tel Aviv's Rabin Square, demanding that the Israeli government examine their asylum requests, and cease the harsh detention policies against them. The demonstraters were joined in solidarity by Israeli activists. 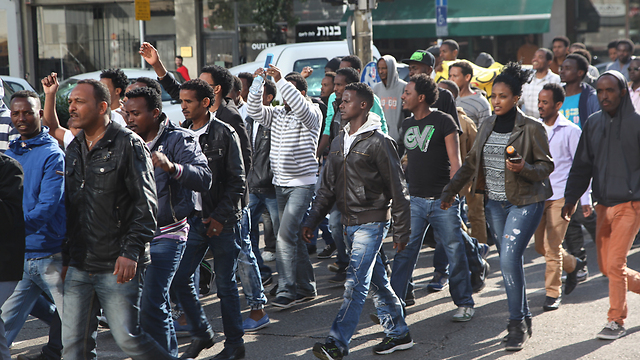 The asylum seekers marching (Photo: Motti Kimchi)
Former Tel Aviv City Council member Yael Dayan told Ynet: "I protest against the injustice caused by the new Infiltration Prevention Law. This law, which means arrest and no trial, will not be passed by the High Court of Justice. The people here are refugees and asylum seekers, not infiltrators. The government should allow them to work, that would solve a large part of the problem." There was also a protest in Eilat also witnessed Sunday, as 350 asylum seekers demonstrated in front of government offices. As part of the protest strike, hundreds of foreign workers are absent from hotels and restaurants in the city. The hotels said that the leaders of the protest sent representatives across the city in order to prevent people workers from getting off buses and entering the hotels.