Miri Regev, the thorn in Netanyahu's side

The Likud MK is behind two bill proposals that would tie Netanyahu's hands in peace talks, and embarrass him in front of the Americans

Israel's chief peace negotiator, Justice Minister Tzipi Livni, was definitely unimpressed by Likud MK Miri Regev's bill on the annexation of the Jordan Valley, and her latest legislative mission is sure to make Livni and Prime Minister Benjamin Netanyahu cringe with embarrassment.

On Sunday, the outspoken and controversial lawmaker from Netanyahu's own Likud party is planning to introduce a proposal that could scupper the peace talks currently underway under American auspices. Regev, who notoriously referred to African asylum seekers in Israel as a cancer (and then apologized to cancer victims), wants Knesset oversight on any peace talks that include Jerusalem or the right of return for Palestinian refugees and their descendants.

Under the terms of the bill, the prime minister would be unable negotiate on Jerusalem or the right of return without prior permission from the Knesset.

"Negotiations on these issues, which are launched without approval from the Knesset, are non-binding", reads the proposed legislation. "In such an event, government bodies will not be committed to the outcome (of these negotiations), nor will the talks or their outcome be valid for the State of Israel, the government of Israel or other authorities in the State of Israel."

Regev says the proposal is based on a previous draft by Communications Minister Gilad Erdan in the last Knesset, which was never presented for a vote in the Knesset plenum.

"The aim is to reach a situation in which there cannot be negotiations on drastic concessions that adversely impact on the Jewish identity of the state and exacerbate the rift that exists in Israeli society, without the approval of a majority in Israel's parliament," Regev says. "Such actions are forbidden, anti-democratic, and, according to this proposed bill, illegal. Thus, any negotiations held without Knesset approval would be invalid."

Previous experience should teach Netanyahu to be worried. Regev was the driving force behind the proposal to annex the Jordan Valley, which last Sunday sailed through the Ministerial Committee for Legislation. The proposal, which must now pass its Knesset readings, was intended to tie Netanyahu's hands, preventing him from including the settlements in the Jordan Valley in any diplomatic agreement reached with the Palestinians. 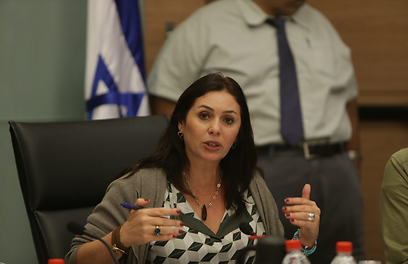 Miri Regev (Photo: Alex Kolomoisky)
Netanyahu is opposed to the annexation bill, fearing it would embarrass him in front of the Americans, but his office decided to allow Likud ministers on the committee a free vote. It seems that those who did not oppose the bill did so out of a desire to please the rightist elements in the Likud Central Committee, who pushed Regev into a safe spot on the Likud list in the last primaries, as well as the electorate in general.

The bill was easily passed by the committee, which is packed with Likud Beiteinu and Habayit Hayehudi ministers, by eight votes to three. This was much to the consternation of Livni, the panel's chair, and committee members Yair Lapid and Yael Germann of Yesh Atid, all of whom voted against. Even so, the bill is not expected to make it into law, and nor is Regev's new initiative.

Nonetheless, in the past week and a half, Regev has become a source of internal strife in the Likud – one who has now taken aim at the prime minister.