The commanding officer of the Regional Samaria Brigade, Brig. Gen. Yoav Yarom, had his car tires slashed while meeting with the head of the West Bank settlement of Yitzhar on Friday.

Yarom was meeting with representatives of the Nablus-adjacent settlement to discuss the recent friction in the last week between settlers and Palestinians near Yitzhar. After the meeting he returned to his jeep, which was parked inside the settlement, and found his tires were punctured. The Shai Region police are investigating the incident. 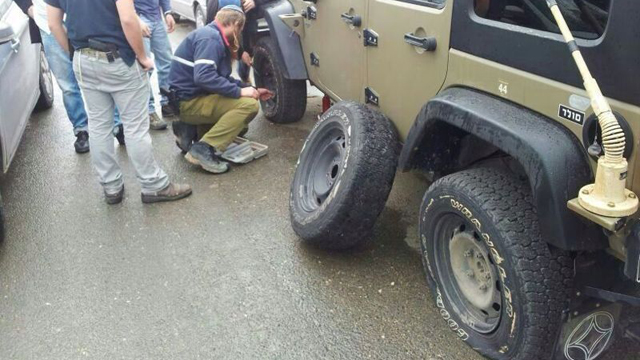 Prime Minister Benjamin Netanyahu condemned Friday's vandalizing of the car of an IDF general, saying: "It is a criminal act that does not represent the settlers of Judea and Samaria."

Defense Minister Moshe Ya'alon responded to the act of vandalism, saying "This is an intolerable incident, which requires determined response… Damaging the officer's car is a heinous act that was perpetrated by a group of outlaws who belong behind bars."

The IDF Spokesperson's Unit stated that the military "finds such incidents against IDF officers and soldiers, who are working day and night to protect the residents of the State of Israel, outrageous."

The committee of Yitzhar residents said in response: "Despite seious disagreements on several issues with the Samaria Brigade chief, such acts do not serve any goal and are unacceptable."

The committee added that the Samaria Council "condemns any harm done to IDF soldiers, surely targeting a brigade chief that was here to offer help. Locals helped repair the damaged tire and apologized for the incident."

On Wednesday, the B'Teselm rights group released a video showing settlers hurling stones at the house of a Palestinian family and a school in the village of Ourif, near Nablus, while accompanied by IDF soldiers who did nothing to stop the vandalism.

"The filmed record indicates that the military, which is required to defend Palestinians in the West Bank, in actual fact served as a security entourage for violent settlers. During the incident, the military backed the settlers in their assault on Palestinians and their property," a B'Tselem statement noted. "The footage of the incident shows that the soldiers acted with disregard to their duty to protect the Palestinians: they did not put an end to the violent acts they witnessed, responding only when Palestinians threw stones back at the settlers. The soldiers also did not seem to have made any attempt to identify the masked individuals or detain them until the police arrived at the scene, so they could be charged appropriately," the organization said.

In other recent friction, on Tuesday 11 settlers were attacked upon entering a different village in the same area.

In Tuesday's events in Qusra, seven suspects were arrested on Friday, of which four are minors.

The confrontation broke out between settlers and Palestinians at the Eish Kodesh settlement in Samaria, after an illegal structure was evacuated and destroyed. The sides threw stones, and the quarrel made its way into the Palestinian village Qusra.

The Jews escaped, running away into an empty structure between the villages Qusra and Karyut. The Palestinians then flanked the house

The Palestinians held the settlers hostage inside the village, but after a short period of time the IDF arrived and removed the settlers. Local members of Rabbis for Human Rights intervened and acted as a human shield for the settlers until security forces arrived to break up the altercation.

On Friday three northern West Bank residents were arrested for allegedly trying to conspire against a Civil Administration representative from the Kibbutz Tirat Tzvi, in an attempt to damage his car. Police arrested them and found gas cans, and pictures of demolished buildings in Jewish settlements in Samaria. They said the representative is responsible for issuing demolition orders for illegal buildings.