'Revenging of the blood of thy servants which is shed'
Photo: Rabbis for Human Rights

Only week after radical settlers enter Palestinian village of Qusra and are beaten and arrested by Palestinians, an additional 'price tag' attack by settlers trying to avenge the incident takes place. 'Arabs out' and 'Best regards from Qusra' spray painted on mosque

The front door of a mosque was set ablaze Wednesday, in what could be an additional hate crime in the West Bank. 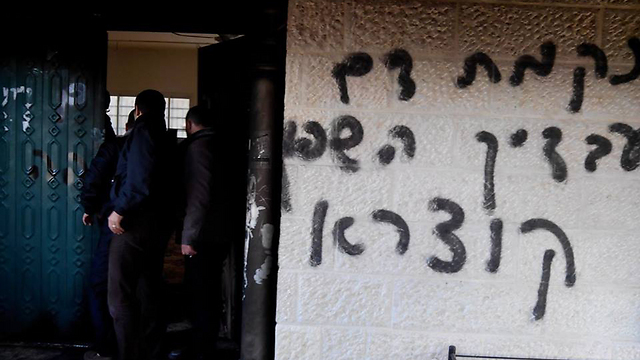 'Revenging of the blood of thy servants which is shed' (Photo: Rabbis for Human Rights)

No people were injured when unknown assailants lit a fire at the base of a mosque door in Dir Aistia, south of Qalqilya. The words "Arabs out!" were spray painted on the door.

Additional graffiti was found on an adjacent wall reading "Best regards from Qusra,” a reference to an incident in which a group of settlers who entered the Palestinian village of Qusra were apprehended and beaten threatens by locals who then passed them on to the IDF. According to some reports, the settlers had entered Qusra with malicious attempt. 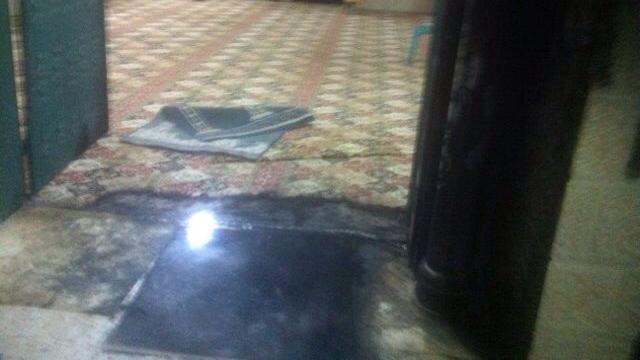 An additional graffiti was found on the scene, referencing Psalms 79:10: "Revenging of the blood of thy servants which is shed." 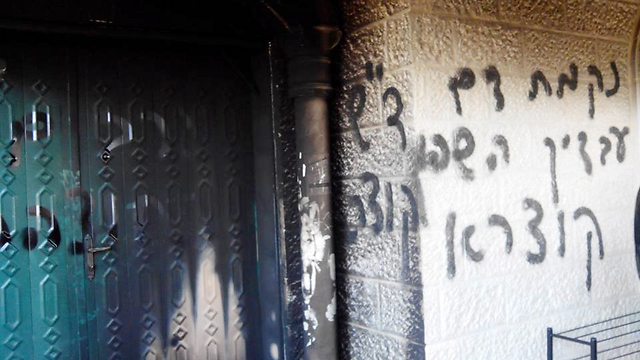 In response to the incident, the army said "The IDF views such events with the utmost severity, they divert the attention and efforts of security forces from the primary mission of fighting terror. Such events also work to destabilize the region."

Last week, eleven 'hill-top youth' settlers from the outpost of Esh Kadosh entered the Palestinian village of Qusra, just south of Nablus, and were apprehended by local Palestinians after clashes erupted between the two sides.

According to the settlers, the attack was the result of clashes that took place earlier between settlers and Palestinians over security forces' evacuation of an illegal structure near the Esh Kodesh outpost.

Palestinian residents of the village however said the settlers entered their village, and attacked a young boy, who sustained head injuries as a result. Once the boy was attacked, the Palestinians said, several Qusra residents rushed to his defense and stopped the settlers.

The settlers then fled the scene and entered a Palestinian house under construction. According to Palestinian activists for human rights, locals surrounded the house and were intending to attack the settlers. The Palestinian activists then created a buffer between the villagers and the house in which the settlers were barricaded. According to the activists, they stopped locals from entering the house and avenging the boy's attack. Several of the settlers sustained bruises as a result of the attacks and the Palestinian activists returned them to the IDF. The incident sparked a row of price tag attacks, including one in which the tires of the Samaria Brigade chief, Brig. Gen. Yoav Yarom, were slashed while he was in a meeting with the head of the West Bank settlement of Yitzhar. The targeting of an IDF general sparked unprecedented criticism by the IDF of settler violence. "How can you harm those who guard you and put their lives at risk for you?" a combat soldier asked.

"We are here 24/7 – patrolling, guarding, arresting suspects – and this (vandalizing of the officer's vehicle) was just a spit in the face," the soldier added, referring to the tire slashing incident.