After decade of planning and construction and more than £350,000, largest enclosure in UK allowing religious Jews to carry items outside homes on Shabbat finally goes operational. 'It has changed many people's lives here,' says local project manager

VIDEO - Manchester's large Jewish community marked a historic achievement last weekend. It took as much as a decade of bureaucracy, a Facebook page with hundreds of followers and more than £350,000 (about $575,000) for the northwestern English city's Shabbat-observant Jews to complete "operation eruv" in order to finally be able to go out on the street during the day of rest.

Eruv – an enclosure of an area in order to define it as "private property" – is acceptable in all of Israel's cities and in certain parts of the United States, allowing religious Jews to carry different objects outside their homes – from a baby's stroller to a tissue – on Shabbat and Yom Kippur.

'Real joy of the Sabbath'

The Manchester eruv has a perimeter of more than 13 miles (21 kilometers), and is the largest in Britain. It covers major parts of the city's neighborhoods with a high Jewish presence.

Moshe Katz, the project manager on behalf of the Eruv Committee of the Manchester Beth Din, told Ynet that the last Shabbat, the first to include eruv, changed the lives of the community's tens of thousands of members, giving them "real oneg Shabbat" (joy of the Sabbath). 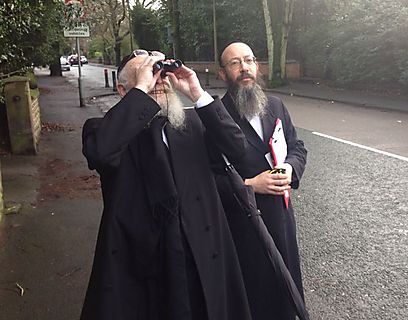 The local Jewish community is considered the biggest outside London with some 24,000 Jews. The local Beth Din (rabbinical court) is one of the most influential and acceptable in the Jewish world.

The community's life, like the lives of most Jewish Orthodox communities around the world, was difficult and challenging every Shabbat. The halachic ban on carrying objects outside one's house (the "private territory") on the street (the "public domain") forced the community members to leave their houses' doors unlocked every time they left the house on Shabbat, as they could not take their keys with them.

Mothers were unable to go out with their small children, not to mention babies who they could not carry in a stroller or in their arms. Essential items like medications or reading glasses prevented masses of people from leaving their homes every single Shabbat.

Last Shabbat, the curfew finally ended, and the kingdom's media, led by the BBC, joined the coverage. After a 10-day inspection by Israeli rabbis specializing in eruv, who gave their final approval, the Jews of Manchester celebrated the biggest eruv in the history of England as the streets filled with families taking a Shabbat stroll for the first time in the community's history. 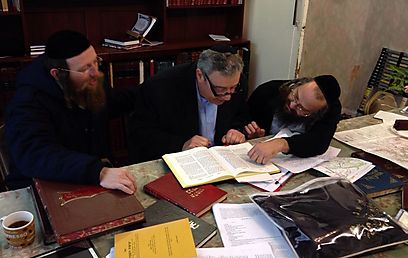 Struggling with the problem. 'It's all built in the best halachic way'

"I don't have small children I had to take out in a stroller, but for many people here it was simply a life-altering move," says Moshe Katz. "The ability to just walk around freely with objects on the street for a real Shabbat joy for many people."

It was a dream of more than 30 years. "When the community was founded about 100 years ago, there was eruv in the city. Over the years it was ruined, and the ability to 'mobilize' objects on Shabbat stopped," says Katz. "The community wanted to renew the eruv, but found it difficult to obtain the required permits." 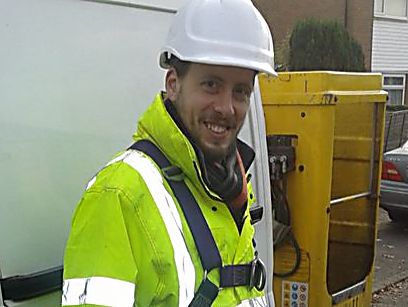 Moshe Katz. 'I explained to the authorities that we were not turning areas here into a Jewish city'

In the past decade the local community was finally able to bring the dream to an operational stage: "They brought two well-known experts from Israel to define exactly how it should be done," Katz recalls. "Two and a half years ago, after they had all the required permits, they asked me – as a contractor – to execute the project."

"It's all built in the best halachic way and adjusted to the different halachic methods. The goal was for everyone to be happy, and that it would be as close as possible to the variety of halachic methods. And then the experts arrived again to check that it was all built properly, before the Beth Din approved the eruv."

How does one explain to the locals what "eruv" means and why it's needed?

After two or three times, I realized that the matter had to be explained to the local authorities in a very simple and basic manner. I showed them what needed to be done, how it was supposed to be, and why the Jewish community needed it. I clarified that areas here would not be turned into private areas or a 'Jewish city.' They really understood and cooperated.

"The British government wants to help religious needs as much as possible. There was no problem with the local residents either, and there wasn't even one objection."

The Manchester Eruv website launched in favor of the initiative includes a local map with the area where religious residents are free to walk around with objects on Shabbat, and pocket maps were issued for residents to use during the holy day. 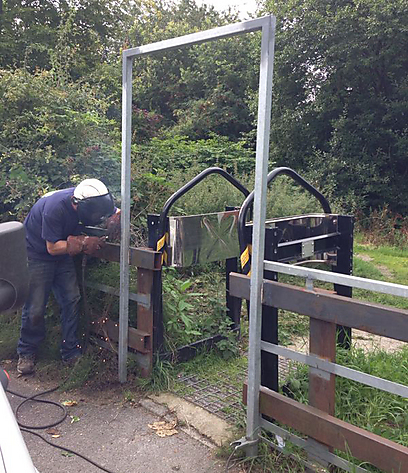 The eruv will be checked every Friday to ensure that it's halachically intact in accordance with the local Beth Din's orders. Rabbi Avigdor Grossberger and Moshe Katz are in charge of the eruv on behalf of the Beth Din.

The large sum required for the eruv's construction (about £350,000) has yet to be fully raised, and the community is still trying to raise the remaining £10,000, and that will not be the end of the story.

The eruv, which was built in non-Jewish surroundings, will have to meet the cost of authority inspections and future repairs. The maintenance, according to Manchester Eruv, is expected to cost £30,000 a year, which the community will have to pay for on its own. According to Katz, the real sum will be much smaller, but "this is a sum which must be kept aside for a particularly large repair."

The Beth Din urged the community members to donate money for the initiative, and the website states that anyone who will contribute a minimum of £50 a year will receive a text and/or an email message before Shabbat indicating the status of the eruv for that weekend.

The website further mentions that synagogue rabbis will provide their members with detailed guidance in order to protect the halachic status and sanctity of Shabbat.

Coming out of 'Shabbat child jail'

While the eruv affair in London has already led to serious battles within the local Jewish community and even caused a split, in Manchester the atmosphere appears to be much more relaxed. However, community member Angela Epstein wrote in a special column in the Jewish Chronicle that the communal dilemma still exists. 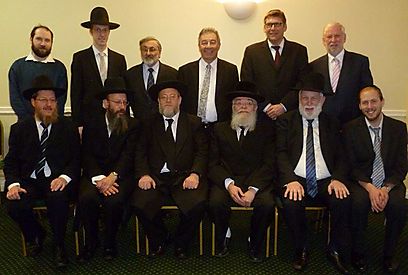 "It will be fascinating to observe whether my city’s holy status will be compounded or compromised by the fact that tomorrow (Shabbat, January 11) the long-awaited Manchester eruv finally goes live," she wrote. "I suppose it depends — oh, dear — which side of the fence you’re on.

"How well I remember those wall-climbing years of Shabbat child jail. The elderly and infirm will be liberated with assistance from wheelchairs and walking frames.

"Let the eruv both literally and symbolically remind us that one central tenet of our religion is to help each other. And with that we must give the eruv our fullest support.

"And if the holier-than-thou are still not convinced, they can have my Shabbat belt. From tomorrow it’s going to be out of service."

The joy over the eruv was slightly interrupted. According to the Yeshiva World News website, the local Satmar community waged a battle against the eruv, and after losing it, its rabbis posted messages on the bulletin boards of the Yetev Lev community ordering members not to rely on the new eruv installed in Manchester.

According to Moshe Katz, even in Israel there are strict communities which avoid carrying objects in the city of Bnei Brak or in Jerusalem's neighborhoods.

"The eruv was installed in a very respectable manner, and we treat every rabbi and every community respectably and always try to improve and satisfy," he says. "It's all done in accordance with experts from Israel and at the highest halachic standard."