Prime Minister Benjamin Netanyahu made an unannounced visit to Amman in Jordan on Thursday, for talks with King Abdullah II on the peace process between Israel and the Palestinians. Jordan's king urged Netanyahu to seize the moment and opportunity to achieve a lasting and comprehensive settlement with the Palestinians, the Royal Palace said.

The palace quoted Abdullah as urging Netanyahu to make use "and build on the opportunity made available by the consolidated efforts of the U.S. secretary of state to achieve tangible progress in the peace negotiations."

The ultimate goal, Abdullah added, is the establishment of an "independent and viable Palestinian state" with East Jerusalem as its capital. He stressed that Palestinian-Israeli final status negotiations touch on "higher Jordanian interests."

"They are a top priority for us," he told Netanyahu. 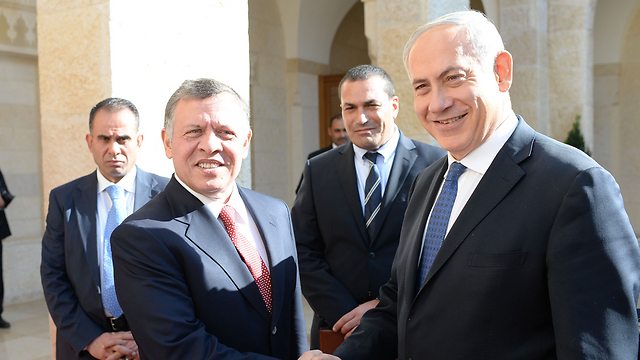 According to the palace statement, the meeting with Netanyahu was significant because it coincided with a "critical period" in the negotiations, but did not include any elaboration. The palace said the talks reflected the monarch's "keenness to achieve a tangible progress in Palestinian-Israeli negotiations that would meet the aspirations of the Palestinian people, while at the same time protect higher Jordanian interests."

The Royal Palace in Amman said in a statement that Netanyahu and Abdullah held closed-door talks about the "developments in the peace process", a reference to the US-sponsored Israeli-Palestinian negotiations currently underway. Netanyahu made at least three similar visits to Jordan last year. There was no immediate comment in Israel on the visit.

Jordan maintains cordial relations with Israel under a peace treaty signed in 1994 – one of only two signed agreements Israel has with an Arab nation. The other agreement is with Egypt, and was signed in 1979.   In the Israeli-Palestinian negotiations, which resumed last summer, the two sides set an April target date for agreeing on a framework for peace. Jordan has significant interest in the peace talks, especially in its own border with a future Palestinian state, as well as in the fate of Jerusalem and hundreds of thousands of Palestinian refugees and their descendants. Jordan hosts the largest number of Palestinians outside the West Bank and Gaza.

Jordan's peace treaty with Israel recognizes a "special" Jordanian role in caring for Muslim and Christian holy shrines in East Jerusalem, which the Palestinians hope will be the capital of their future state.