Iran has halted its most sensitive nuclear activity under a ground-breaking deal with world powers, a confidential UN atomic agency report obtained by Reuters showed, paving the way for the easing of some Western sanctions.

The report by the International Atomic Energy also said Iran had begun diluting its stockpile of uranium enriched to the fissile concentration of 20% - a level that took it closer to the capability of producing fuel for an atom bomb.

It was referring to Iran's two enrichment plants, at Natanz and Fordo. Cascades are interlinked networks of centrifuge machines that enrich uranium. Iranian state television earlier said Iran had suspended 20% enrichment at Natanz and that inspectors were heading to Fordo. 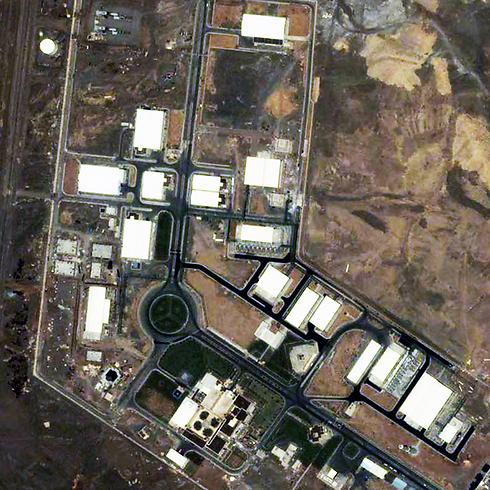 Satellite image of Natnaz plant, December 2007 (Photo: AP)
"The suspension of 20% enrichment has started at the Natanz plant and the International Atomic Energy Agency inspectors are going to the Fordo plant," state TV quoted the deputy head of Iran's Atomic Energy Organization, Behrouz Kamalvandi, as saying. The IAEA report also listed other measures Iran had agreed to under the interim accord with the six world powers - the United States, France, Britain, Germany, China and Russia. Those included an undertaking that Iran would not build any more enrichment sites during the six-month agreement, a step meant to buy time for negotiations on a final settlement of Tehran's decade-old nuclear dispute with the six powers. Enriched uranium can have both military and civilian purposes. Iran denies Western allegations that it has been seeking to develop the capability to make nuclear bombs, saying it wants only civilian atomic energy.