Four people were killed in a blast in Beirut's southern suburbs on Tuesday, a Lebanese security source told Reuters, attributing the blast to a suicide bomber wearing an explosive belt.

The source said another 20 people were wounded in the explosion, which occurred in a stronghold of the Islamist Hezbollah organization.

Lebanese security officials said the blast hit a Shi'ite-dominated neighborhood, setting fire to a building and sending plumes of smoke over the area. The blaze was later brought under control.

The Lebanese army has imposed a closure on the area in the wake of the attack. 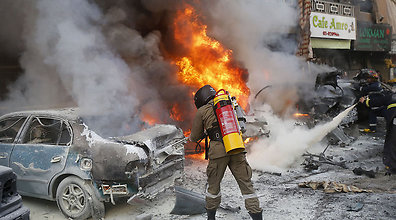 The officials say the blast in Haret Hreik district took place meters away from where a car bomb struck earlier this month, killing five people.

Hezbollah's al-Manar television station broadcast footage from the blast site, showing hundreds of people flocking to the area as ambulances and firefighters rushed to the scene.

According to the Lebanon Now website, Progressive Socialist Party Leader Walid Jumblatt issued a statement following the suicide bombing, stating that security collaborations are more important than collaboration regarding the new cabinet.

“Lebanon has entered an insane circle, and we expect more bombings in the country,” the statement said.

Lebanese Prime Minister-designate Tammam Salam also issued a statement, Lebanon Now reported. “This is a heinous terrorist act. The response to it should be through consolidation of the internal front,” said Salam.

The bombing is the latest in a series of attacks targeting Shiites in Lebanon, apparently in retaliation for Hezbollah fighting in Syria on the side of President Bashar Assad's troops.