There are very few within the Palestinian leadership who are in the know regarding the negotiations with Israel. Senior Palestine Liberation Organization (PLO) official Yasser Abed Rabbo is one of them.

In a uniquely candid interview, Abed Rabbo reveals the details of US Secretary of State John Kerry's plans for the negotiations, while clarifying why the Palestinians have lowered their expectations regarding the current talks' success. 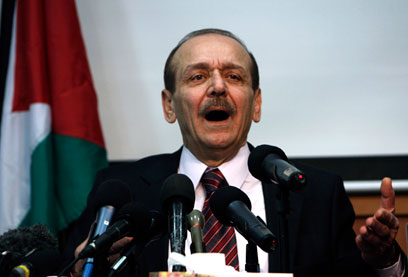 Abed Rabbo at a press conference in Ramallah (Photo: Reuters/Archive)

However, the US will take part and be present in the evaluation of the Palestinian Authority's security establishment so that Israel would withdraw and evacuate some of the areas in the West Bank, including the Jordan Valley. In addition, Israel would have security arrangements in mountain tops and in the skies. Israel would also maintain the right to perform live chases within the Palestinian country's territory if any threat dictates the need to do so.

He stressed that these ideas were completely unacceptable by the Palestinian leadership. Abed Rabbo argued that according to the Israeli perception, the large settlements that are not in settlement blocs should still be considered as part of them. He said that the Palestinians heard Israel is interested in either long-term leasing of what is left in the non-bloc settlements or to keep these settlements within the Palestinian country, along with maintaining the Israeli citizenship of those who reside there.

According to him, the best scenario is to have the Palestinians offered a suburb of Jerusalem, such as Kafr 'Aqab or Abu Dis, and this territory would be dubbed The Palestinian Capital of Jerusalem. He added that there is talk of a limited return of Palestinians to areas of Israel.

Abed Rabbo further added that according to what the Palestinians know, Prime Minister Benjamin Netanyahu has also rejected Kerry's plan. According to him, Netanyahu is not interested in any Palestinian tie to Jerusalem or in the return of even one Palestinian refugee, and he is no interested in the existence of a third party, whether American or not, in the Jordan Valley security arrangements, even under full Israeli control.