Several thousand people marched through Paris on Sunday in a "Day of Anger" against embattled President Francois Hollande which ended in clashes between police and protesters, anti-Semitic cries and the recently popular reverse Nazi salutes. 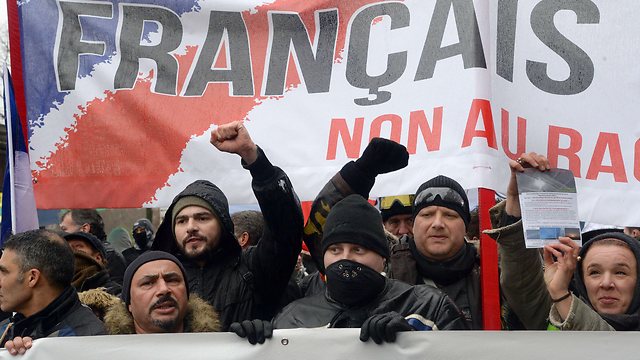 The protest against Hollande (Photo:AFP)

During the protest, some called for France's withdrawal from the European Union, while others urged the respect of freedom of speech, a reference to the government's recent decision to ban a show by controversial comic Dieudonne, whose sketches have been deemed anti-Semitic.

A Jewish students union, the UEJF, condemned "anti-Semitic slogans and Nazi salutes" by some protesters.

"This 'Day of Anger' has turned into a day of hate," said its president Sacha Reingewirtz.

Police said at least 150 people had been arrested after the clashes, during which 19 officers were injured, one of these "potentially seriously", according to one police source.

Interior Minister Manuel Valls condemned the violence "by individuals, varied groups from the extreme and ultra-right, whose only goal is to create unrest".

The march organized by a motley group of some 50 small and mainly right-wing organizations, however failed to attract bigger anti-Hollande movements.

Organizers claimed a turnout of some 120,000 people, however police estimated there were 17,000 people at the protest, held under pouring rain.

The demonstrators railed against a slew of policies under Hollande, the most unpopular French president of modern times, such as last year's law allowing gay marriage.

Many in the crowd complained about Hollande's tangled love life a day after the president announced his split with his partner Valerie Trierweiler following an affair with a younger actress.

"There are enough scandals about the president, he is bringing dishonor to France," a 60-year-old woman who only identified herself as Marion said.

"You are here to say you are fed up," an organizer told the crowd, adding that France's leaders "are more preoccupied with their affairs ...than unemployment."

France, the eurozone's second largest economy, is battling huge levels of unemployment. Hollande recently announced plans for 50 billion euros ($68 billion) in spending cuts between 2015 and 2017 to revive the economy.

Several parties and organisations such as the far-right National Front did not take part in the protest.