While an outline agreement with the Palestinians has yet to be officially laid for review, Prime Minister Benjamin Netanyahu defended the peace process on Tuesday while being attacked by all sides of the Israeli political arena.

In a speech to the annual defense conference of the Institute for National Security Studies (INSS), Netanyahu addressed the political negotiations and their possible outcome: "The Americans are establishing American positions – not Israeli. Israel does not have to accept these positions. The Palestinian state should be a demilitarized entity that recognizes the Jewish state." 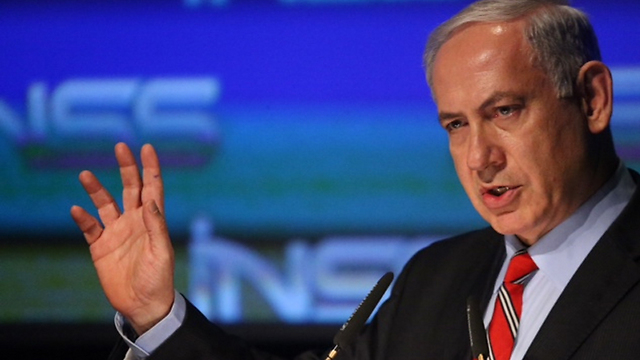 Netanyahu emphasized that in the negotiations with the Palestinians, he is seeking to secure two conditions: "I don't want a bi-national state and I don't want another Iran-sponsored state that launches rockets and terror at us. We have been through serious turmoil, and after fives years of supervised and responsible navigation, we will soon know if we can continue the negotiations with the Palestinians.

According to him, the Americans are working to establish their own stances which will not be mandatory for Israel to accept: "We insist on the recognition of a Jewish state as a national state for the Jewish people – that is the root of this conflict. The conflict is not about the territories or the settlements and it is not about a Palestinian state. The Zionist movement agreed at the time of the Partition Plan on a Palestinian country but the conflict persists due to the stubborn opposition to acknowledge a Jewish state.

The prime minister also addressed the ongoing incitement in the Palestinian Authority and Gaza – in the media, mosques and schools – and began discussing mandatory security arrangements.

"The most succinct formula for a peace arrangement," he said, "is a demilitarized Palestinian state that recognizes the Jewish state. We do not want to annex them as citizens nor do we want to rule them."

Referring to issue of a nuclear Iran, Netanyahu stressed that an interim agreement between Iran and the six world powers only delayed the Iranian nuclear program in six weeks.

Netanyahu furthermore said that Israel will only support an arrangement that will ensure a complete dismantling of Iran's abilities of obtaining nuclear arms for military purposes.

Economy Minister Naftali Bennett lashed out on Tuesday at Israel's ongoing peace talks with the Palestinians, warning that negotiations inevitably lead to violence against Israelis.

"2012 was the quietest year since there were no political negotiations," he said. "No one died that year in any attacks in Jerusalem or Judea and Samaria. As usual we can say, since the peace talks began, an intifada came about."

Bennett passionately dismissed the chances of achieving true peace with a two-state solution. Referring to recent statements made by both sides, including Netanyahu, in regards to having Israeli citizens living under a possible Palestinian rule, he said: "You know why Israelis can't live under Palestinians? Because they'll be killed. How do I know this? Because it has already happened. One day, one morning, our neighbors woke up and killed us."