State of the Union
Photo: MCT

In State of the Union address, US President Obama takes a tough line against Iran sanctions to Congress and attempts to quell Israeli concerns, reassuring 'Jewish state that America will always be at their side

US President Barack Obama took his hard line against new sanctions over Iran's nuclear program directly to US lawmakers on Tuesday by pledging in his annual State of the Union address to veto any legislation that threatens talks with Tehran.

Obama also made a general defense of US foreign policy, citing US-peace talks: "As we speak, American diplomacy is supporting Israelis and Palestinians as they engage in the difficult but necessary talks to end the conflict there, to achieve dignity and an independent state for Palestinians and lasting peace and security for the state of Israel, a Jewish state that knows America will always be at their side." 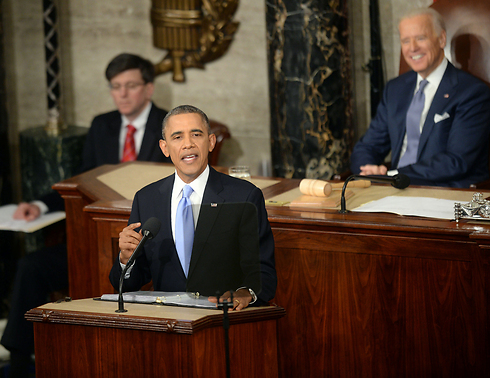 Regarding Iran, Obama said an interim agreement seeking to curb Iran's nuclear program was already taking effect, and the ongoing diplomacy was important for US safety.

"The sanctions that we put in place helped make this opportunity possible. But let me be clear: if this Congress sends me a new sanctions bill now that threatens to derail these talks, I will veto it," Obama said in his speech in the House of Representatives chamber.

"For the sake of our national security, we must give diplomacy a chance to succeed," he said. He reassured Israel, a US ally that is extremely wary of Iran's nuclear program, referring to "a Jewish state that knows America will always be at their side." He added that all options – including the military option – were on the table for keeping Iran from getting a nuclear weapon if need be. 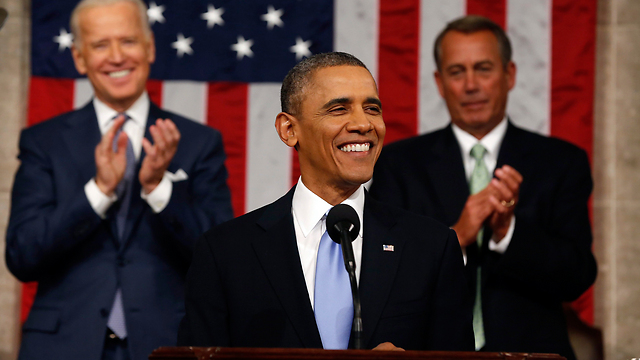 'For sake of our national security, we must give diplomacy a chance' (Photo: AP)

"If Iran's leaders do seize the chance, then Iran could take an important step to rejoin the community of nations, and we will have resolved one of the leading security challenges of our time without the risks of war," Obama said.

Tehran rejects allegations that it is seeking the capability to produce nuclear arms, insisting its atomic ambitions are limited to peaceful purposes such as the generation of electricity.

Fifty-nine of the 100 US senators, including 16 of Obama's fellow Democrats, co-sponsored a bill that would impose new restrictions on Iran if talks on a permanent deal falter.

But Iran has warned it will walk away from negotiations on its nuclear program - raising the risk of conflict in the Middle East – if the bill becomes law. The measure is now stalled in the Senate amid expectations the chamber's Democratic leaders will not allow a vote.

Supporters insist the bill would help hold push Iran during the negotiations. "The Menendez-Kirk bill is an insurance policy against Iran's development of nuclear weapons and ensures a process for the peaceful dismantlement of Iran's nuclear infrastructure," Illinois Republican Senator Mark Kirk said in a statement after Obama's speech. 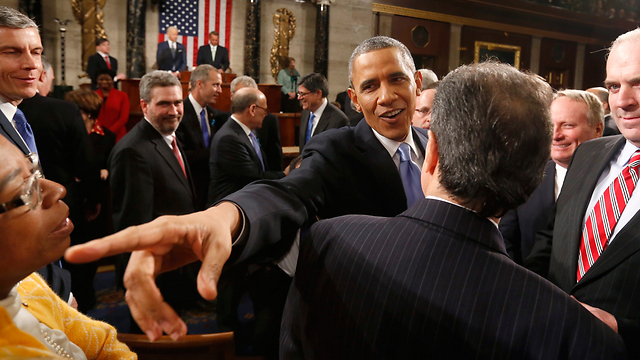 Obama: US diplomacy 'backed by pressure' (Photo: AP)
Obama said US diplomacy "backed by pressure" had rolled back Iran's nuclear program for the first time in a decade, as negotiators from six world powers hold talks with Iran. "These negotiations will be difficult. They may not succeed," he said, adding his administration was "clear-eyed" about Iran's backing for terrorist organizations and mistrust "that cannot be washed away" between Washington and Tehran. "If John F. Kennedy and Ronald Reagan could negotiate with the Soviet Union, then surely a strong and confident America can negotiate with less powerful adversaries today," Obama said. Obama promised to support more sanctions if Iran backs away from the talks. Obama also briefly re-affirmed his promises to end the war in Afghanistan this year, pursue al-Qaeda with limited strikes and support Syrian opposition groups in their bloody three-year quest to push their ruler from power. The Associated Press contributed to this report