Indyk: Framework deal to include compensation for Arabs, Jewish refugees

US peace mediator Indyk spill beans on US-led framework agreement, saying deal to include mutual recognition, security arraignments, Israeli sovereignty for roughly 75% of settlers and compensation for both Jews and Arab refuges from 1948

The US Mideast peace envoy adumbrated the framework agreement being negotiated before US Jewish leaders Thursday, and said that a solid majority of settlers will remain under Israeli sovereignty.

Martin Indyk told a conference of Jewish organizations that the framework agreement between Israelis and Palestinians will include compensation for Palestinian refugees, and will also reference the right to compensation for Jews who were forced to flee Arab countries on the eve of Israel's formation. 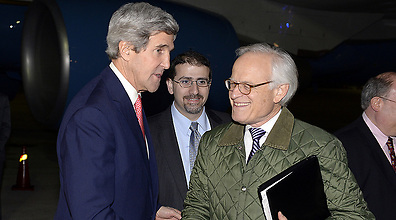 US Secretary of State John Kerry and Martin Indyk at the US Embassy in Tel Aviv last month (Photo: Matty Stern/US Embassy)

Indyk noted that roughly 75%-85% of Jewish settlers will be allowed to remain in their West Bank homes as part of land swaps between Israel and the Palestinians, which will be based on the June 4, 1967 Green-Line.

Indyk denied stating any specific numbers in regards to ongoing negotiations when asked by Yedioth Aharonoth.

Acording to those present, Indyk added that the question of whether settlers will be allowed to remain under Palestinian sovereignty will be postponed until a final status – as opposed to framework – agreement. According to Indyk, the Palestinian leadership has no intention of forming a Palestinian state "clean of Jews".

During the meeting with Jewish leaders, Indyk said there would be "no surprises" regarding the details of the agreement being hatched out by the Palestinians and the Israelis. They agreed to the deal's details, but will not have to sign any agreement and will even be allowed to publicly voice their grievances about its politically problematic aspects.

The Americans want the complete final peace agreement between Israel and the Palestinians by the end of 2014.

A number of those present at the meeting with Indyk, said the envoy sounded "calm and optimistic," and noted that he claimed that "we are weeks, not months, from a framework agreement," the details of which have been agreed on but "without (the sides) having to sign."

Regarding the deal's final details, Indyk stressed it is contingent on the progress currently being made by the two sides.

“There may be things we need to say because they can’t say them yet," Indyk stressed.

The envoy noted that sides are making good progress in the peace talks, and US Secretary of State John Kerry is in constant – sometimes daily – contact with Prime Minister Benjamin Netanyahu.

Indyk sent a clear message according to which skeptics must start treating talks seriously – a hint that coalition tensions might be strained to a breaking point.

Talks are also focusing on compensation for Palestinian refugees from 1948, but for the first time, talks also include compensation for Jews who were forced to leave their homes in Arab nations on the eve of Israel's formation.

The framework deal will also reportedly include an article stipulating an end to Palestinian incitement and include peace-oriented educational program for Palestinians youths.

In comparison, a final status agreement will formally deal with mutual recognition, security, land swaps and borders, Jerusalem, refugees and an end to claims and the conflict. Regarding sensitive issues like Jerusalem, the agreement will remain purposefully vague.