In latest leak from peace talks, report claims US suggests Palestinians get swaths of Negev land in return for settlement blocs. Offer meant to satisfy West Bank Arab leaders, who will be expected to give up idea of having right of return

The 1947 UN Partition Plan for a Jewish and Arab State offered the Jews settlements along the Mediterranean coast, towns in the Jezreel Valley, and as a gift to appease the fledging nation, the UN also awarded the new to be born state with the Negev – an arid desert area, which became 60% of Israel's territory.

More than 60 years later, in an attempt to guarantee the success of the peace talks, the American administration has surprisingly decided to turn back the clock and put the desert back on the negotiating table. This time, however, it is being offered to the Palestinians. 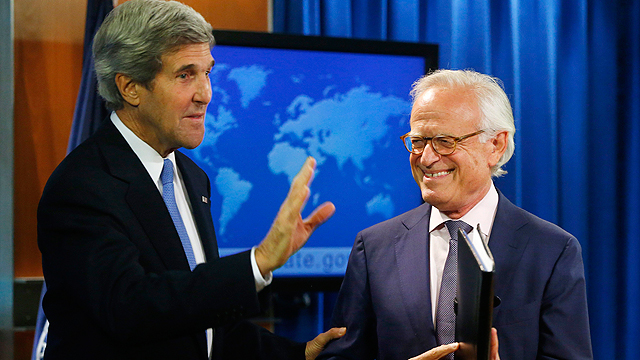 US Secretary of State John Kerry and Martin Indyk at the US Embassy at a joint press conference (Photo:AP/Archive)

According to the plan, Palestinian refugees will be sent to areas in the desert in a land swap deal, which will be governed by the Palestinian Authority. The offer is meant to lay some sweet lines on the Palestinians, who will be expected to give up their idea of having the right of return implemented into any peace deal.

According to the US Mideast peace envoy, Martin Indyk, roughly 75%-85% of Jewish settlers will be allowed to remain in their West Bank homes as part of land swaps between Palestinians, which will be based on the June 4, 1967 Green-Line. In return Israel would have to give up territory, of which a significant chunk would come from the Negev.

Talks are also focusing on compensation for Palestinian refugees from 1948, but for the first time, talks also include compensation for Jews who were forced to leave their homes in Arab nations on the eve of Israel's formation.

Isaac Herzog, Labor head and opposition leader, whose mother was forced out of Egypt and lost all of her property, said the idea of compensation was needed a long time ago.

"It's sad that their stories aren't known around the world," he said, "and it's good that they'll finally be told."

The framework deal will also reportedly include an article stipulating an end to Palestinian incitement and include peace-oriented educational program for Palestinians youths.

In comparison, a final status agreement will formally deal with mutual recognition, security, land swaps and borders, Jerusalem, refugees and an end to claims and the conflict. Regarding sensitive issues like Jerusalem, the agreement will remain purposefully vague.

During the meeting with Jewish leaders, Indyk said there would be "no surprises" regarding the details of the agreement being hatched out by the Palestinians and the Israelis. They agreed to the deal's details, but will not have to sign any agreement and will even be allowed to publicly voice their grievances about its politically problematic aspects.

The Americans want the complete final peace agreement between Israel and the Palestinians by the end of 2014.