Abbas and the king of Morocco
Photo: AP

Abbas to NYT: NATO troops, not IDF, can remain in West Bank

Palestinian president says in New York Times interview that IDF can stay for five years in West Bank instead of three, recognizing Jewish State 'is out of the question'

A future Palestinian state will only be protected by its police force and not by a Palestinian army, President Mahmoud Abbas said late Sunday.

NATO troops, led by the Americans, should be responsible for the security of a future Palestinian state, he said in a New York Times interview. He also claimed that their deployment could be for an indefinite amount of time. 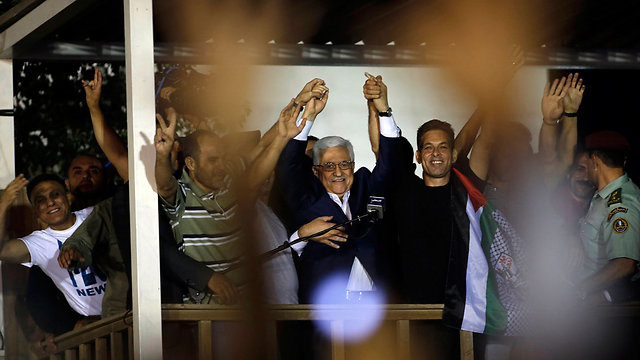 “For a long time, and wherever they want, not only on the eastern borders, but also on the western borders, everywhere,” Abbas said. “The third party can stay. They can stay to reassure the Israelis, and to protect us.

Regarding recognizing Israel as the Jewish State, Abbas said there wasn't a chance that would happen.

“This is out of the question,” he said referring to the Israeli peace deals with Jordan and Egypt, who were never asked to do.

Abbas refused also, however, to let any failure turn into an armed uprising. “In my life, and if I have any more life in the future, I will never return to the armed struggle.”

In regards to a Palestinian army, Abbas made it clear that he knew his neighbors well.

“We will be demilitarized,” he added. “Do you think we have any illusion that we can have any security if the Israelis do not feel they have security?”

Abbas said that the idea to deploy NATO troops was also supported by former prime ministers Ehud Barak and Ehud Olmert, as well as US president George W. Bush.

He said he had previously presented the idea to Prime Minister Benjamin Netanyahu of an American-led NATO force, which would include Jordanians.

Whom do you trust?

“I told him: ‘If you will not trust your allies, so whom do you trust? I am not bringing for you Turkey and Indonesia,’ ” Mr. Abbas recalled. “He said, ‘I trust my army only.’

He also said that the IDF could stay in the West Bank for a period of five years after a final agreement is signed, and not three years, as previously reported.

Regarding the peace talks' timeframe, the Palestinian president said he was willing to deviate from the original nine-month limit for negotiations marked on April 29.

“It’s not a sacred date,” Mr. Abbas said. “Suppose by the end of nine months we got something promising. Shall I stop? I will not stop. If, after nine months, we didn’t get anything, if there is nothing on the horizon, we will stop.”