Iranian foreign minister says the Holocaust 'should not happen again', but links comments to rebuke of Israel over Palestinian issue; remarks are part of larger shift in Iranian regime's public face

After years of denial and insults from previous president Mahmoud Ahmadinejad, Iran's policy on the Holocaust seems to have undergone a similar about-face as its approach to United States. Iranian Foreign Minister Mohammad Javad Zarif told an international conference in Munich on Sunday that that the extermination of Jews by the Nazi regime was "tragically cruel and should not happen again," according to German TV station Phoenix reported.

"We have nothing against the Jews. We do not feel threatened by anyone," Zarif added.

Iran has faced massive criticism over the years for its repeated Holocaust denial. Ahmadinejad often invoked the phrase “the myth of the massacre of Jews”, which, according to ABC news, also appeared in a 2006 speech Ayatollah Ali Khamanei.

As part of the Iranian regime's newfound desire to normalize relations with the international community, Zarif has backtracked, opting for condemnations of the Holocaust that segue into criticism of Israel. 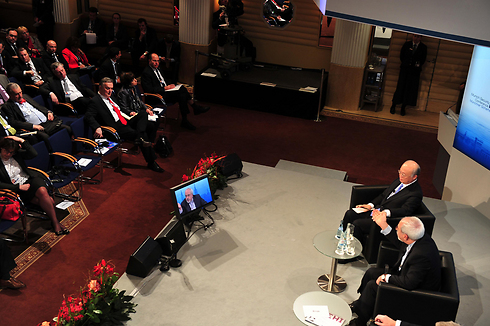 Zarif also went to assert that, "the rights of the Palestinians have been violated by Israel for 60 years."

Last September, in an interview to Georgre Stephanopoulos on of news, Zarif said: “The Holocaust is not a myth. Nobody’s talking about a myth.”

“We condemn the killing of innocent people," he told Stephanopoulos, adding that the "Holocaust was a heinous crime, it was a genocide, it must never be allowed to be repeated, but that crime cannot be and should not be a justification to trample the rights of the Palestinian people for 60 years.”

Zarif held rare private talks with his US counterpart John Kerry on Sunday, and said it would be a "disaster" if Tehran did not turn a provisional agreement to defuse a decade-old dispute over its nuclear program into a permanent deal.

Iran sealed a cooperation pact with the International Atomic Energy Agency last November, pledging to be more open about its nuclear activities. The IAEA and Iran are due to meet again in Tehran on Feb. 8 to discuss future measures.

Zarif said Sunday that Iran and the West had an historic opportunity to improve relations. "I think we need to seize it," he said. Swedish Foreign Minister Carl Bildt, who is due to visit Tehran soon, urged Iran to "come clean" on its past nuclear activities, saying some intelligence agencies believed Iran had had a nuclear weapons program until early 2003. But Republican US Senator John McCain was more skeptical, saying Iran had a long history of deception. "There are three components to nuclear weapons - warhead, delivery system and the material itself. They are... cheating on the first two without any constraint whatsoever," he said. A senior State Department official said Kerry had, during his meeting with Zarif, raised concerns about the issue, as well as the delay in moving Syria's chemical weapons to the port of Latakia, and about humanitarian conditions on the ground, especially in besieged areas. Kerry urged Iran, a staunch ally of Syrian President Bashar Assad, to play a constructive role in bringing an end to the three-year conflict, the official said, adding that Zarif made clear he did not have the authority to discuss Syria. Reuters also contributed to this report