The German official and Rabbi Weiss

The official met with four members of the group in Berlin when they were protesting the existence of the State of Israel and the Zionist exploitation of the Holocaust for political reasons. 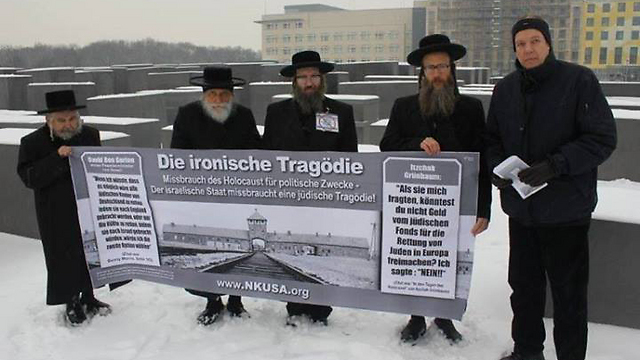 Ynet revealed that the official is a department head in the chancellor's bureau, and against convention met with them openly. Members of Neturei Karta confirmed that the purpose of the meeting was to make it clear to the Germans that Zionism doesn't represent Judaism.

The Neturei Karta delegation included two Holocaust survivors, Moshe Dov and Chezkel Klein, as well as spokesman Rabbi Yisroel Dovid Weiss, who said during the meeting that the "Holocaust was a divine punishment for Jews because Zionists didn't want to follow God and wanted to turn into independents."

Weiss said to the official that about 10% of Jews belong to the anti-Zionist movement.

In recent years, officials in Merkel's bureau have worked to undermine the special connection between Israel and Germany in order to free Germany from the historical responsibility for the Holocaust.

The meeting, reported on in the leftist German paper Neues Deutschland, was not on condition of secrecy.

The Neturei Karta in the past has attended Iranian events denying the Holocaust, led by former president Mahmoud Ahmadinejad.