Heavy security at Paris conference in support of French Jewry

The conference was initiated by the Jewish National Fund to express support to French Jewry, following recent anti-Semitic incidents in France.

Security officers were preparing for anti-Semitic riots, bolstering the premises with hundreds of security officers, thereby managing to thwart protesters who arrived in the area from rioting. 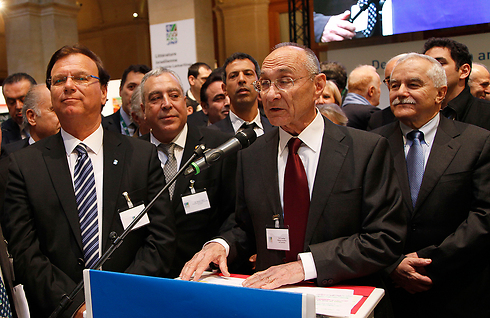 All the speakers addressed rising anti-Semitism in France and expressed their support of the local Jewish community.

Agriculture Minister Yair Shamir said: "We've come to offer support to Jews in the Diaspora and to find strength. Nations rise and fall on the basis of their inner strength and not on the basis of outside pressure."

Stenzler added: "France demands the enemies of Israel to abandon the way of terror, and acknowledges Israel's right not to make compromises on its security."

Tourism Minister Uzi Landau said: "The message of this event – if we stay united we can face anti-Semitism."