Yedioth Ahronoth obtains Shaked Committee draft. Officials close to panel head Shaked say no reason for bill to include criminal sanctions against those not enlisting: 'The police won't arrest hundreds and thousands of haredim, so why go for a provocation?'

In the wake of the High Court of Justice's decision to stop the funding of yeshivot whose students haven't enlisted in the army, the draft of a new military enlistment bill will be brought to a vote next week in the Knesset's inner committees.

Yedioth Ahronoth obtained a copy of the bill, which is based on the proceedings of a special committee dedicated to the matter.

The proposed Law for Defense Services, formed by Minister of Science, Technology and Space (Yesh Atid) Yaakov Peri, passed in its first reading in the Knesset in July. The bill then made its way to a Knesset inner committee, led by Habayit Hayehudi faction leader Ayelet Shaked, in preparation for it to be brought to a second and third vote in the middle of March. The bill underwent changes, and each section is expected to be voted upon starting next Monday. 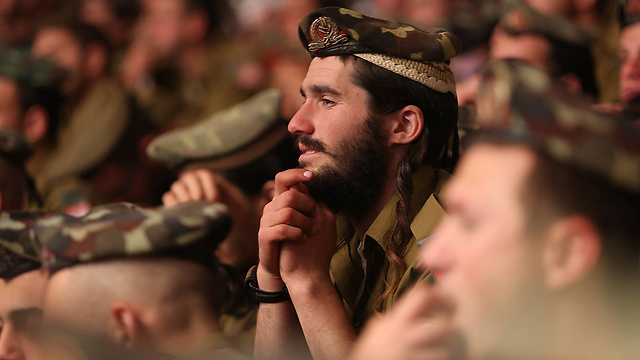 A soldier in a haredi unit at an award ceremony (Photo: Gil Yochanan/Archive)

The draft includes procedures on how the haredim will enlist to military or national service, recruitment targets and stimuli to encourage enlistment. Shaked's proposal of economic sanctions and Peri's proposal of criminal proceedings for those not enlisting were absent from the draft.

According to the draft, each recruitment class of haredim potentially can include up to 8,000 youths. Actual numbers are expected to be implemented gradually, however. In 2014, there will be 3,800 haredim serving, of which 2,300 will enlist in the IDF and 1,500 will perform national service.

The draft refers to each recruitment class as haredim between the ages of 18 and 24, meaning that a haredi can defer his service by six years. If a haredi chooses to defer his service, and the recruitment target is met that specific year, he will be allowed to enter the workforce. For each year that he defers his service and the target isn't met, sanctions, as of yet unclear which, will be imposed upon him.

"The major question is what will happen if the haredim don't meet the recruitment targets," a senior member of the committee said.

Officials close to Shaked said she believes that criminal proceedings against those not serving will only encourage the haredim's resistance.

"The police won't arrest hundreds and thousands of haredim that won't enlist, so why go the way of provocation?"

The bill also proposes to help haredim integrate into the general workforce. At the age of 24, each haredi who served or received an exemption, and every haredi who will be 22 years old at the time of the legislation of the new law, will be able to integrate legally into the workforce.