Foreign Minister takes more moderate stance than in past while still saying government only succumbs to pressure, implicitly criticizes Minister Bennett: 'Kerry is true friend of Israel. Friends shouldn't be turned into enemies'

Foreign Minister Avigdor Lieberman on Friday offered his support to the much maligned Secretary of State John Kerry, and tore apart the Habayit Hayehudi chairman, Economy Minister Naftali Bennett for his criticism of the American politician, without even mentioning his name.

"In the context of the American (peace) initiative," said Lieberman in an address to the Commercial and Industrial Business Club in Tel Aviv, "there is a rhetoric battle for who is blunter, who is more litigious. Kerry is a true friend of Israel. I don't see what is wise about taking friends and turning them into enemies."

Lieberman added: "I support an agreement, but against being a sucker, and we've had our share of being suckers in the past. Such as in the case of the disengagement (Israel's unilateral withdrawal from Gaza in 2005)."

Lieberman reiterated his support for a land swap within the framework of a future agreement with the Palestinians. He also had blunt words for Israeli Arab Knesset members, whom he accused of supporting terrorist organizations.

"All those people who identify themselves with Hamas and Hezbollah , and I mean the Arab MKs like (Jamal) Zahalka and (Ahmed) Tibi who went to George Habash's funeral in Jordan. How can they sit in the Israeli Knesset and not even say one good word? I suggest they go to Syria and say something good about the leadership there."

The foreign minister harshly criticized the government's conduct, claiming that it was ineffective and riddled with infighting.

"The State of Israel is not running anything and only succumbing to pressure. The government acts like a board of directors with groups and struggles against one another," he said. "The coalition, as it is today, has nothing in common – not in the political field and not in the economic one." 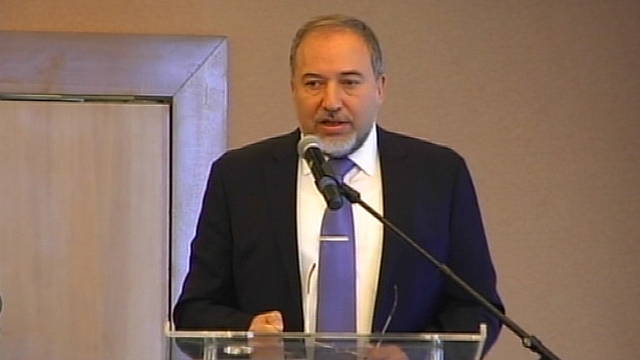 The differences between members of the coalition, he warned, make it impossible for the government to function.

"When you compare where (Yesh Atid's Health Minister) Yael German comes from and where the women of Habayit Hayehudi come from, and when you look at the economic grasp by the Histadrut's Amir Peretz and hi-tech world's Naftali Bennett – you see, in fact, that no substantial change is possible, one neutralizes the other."

The foreign minister further added that "a strong leadership is needed, one with courage to lead a true change in both the economic and political fields. There is hypocrisy here. People are willing to sacrifice everything to earn a few lines in the paper. Every coalition, from its very first day, struggles for its survival. Most of the effort is dedicated to political survival. Leading change that is beyond that is almost impossible. I hope that the bill for change in governance will pass in a month in the Knesset, and the government will be more effective." In regards to boycotts, the Yisrael Beiteinu chairman that "there is nothing new under the sun. (This issue) follows the State of Israel for decades. In the year 1921 a boycott against the Jaffa merchants was declared, and in the year 1959 Renault boycotted the State of Israel due to Arab pressure. We lead great steps against boycotts, and when talking about it we only fuel up the fire and get swept into their provocations."

The foreign minister also expressed support for the current plans to draft yeshiva students into the IDF, as well as other exempt sectors of society.

"The unity of the people is tied to the issue of the draft; it is not just about sharing the burden, it is a privilege to serve in the army. Every young person must serve in the army or perform national service - it doesn't matter if they're Jewish, Arab or Christian. There is no reason why an 18-year-old haredi who doesn't want to serve in the army does not serve his community in a Netanya hospital.

"There will be a majority for the vote... There is no ultimatum; anything that leads to unification is positive. We're closing ourselves off: Haredi neighborhoods and religious Zionist neighborhoods, it puts us into ghettos and that's not a good thing."