Despite lack of progress during January peace talks, 'humanitarian pause' taken to aid suffering residents. Food, medicine to be delivered to besieged Old City after 18 months

UN aid deliveries to rebel-held areas in the Syrian city of Homs were to begin Saturday, a day after dozens of civilians who survived more than 600 days of army siege were evacuated.

The Homs evacuation and delivery of food and medical supplies is part of a deal brokered by the UN between the government and armed rebels following months of negotiations.

"UN teams have pre-positioned food, medical and other basic supplies for immediate delivery as soon as the first group of civilians are out and we hope to send this aid on Saturday morning," said the UN humanitarian coordinator in Syria, Yacoub El Hillo.

"We commend all involved for reaching this milestone today," said Hillo, who oversaw the launch. 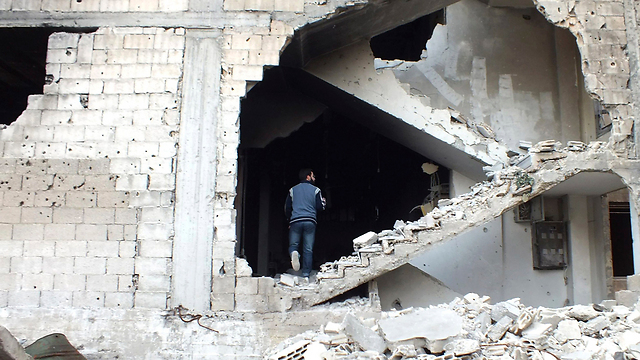 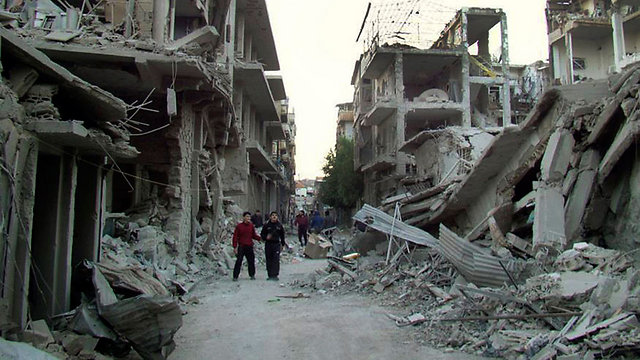 "We understand that for the most part the operation went smoothly, but there were isolated reports of gunfire heard during the day (Friday)," he said.

"We'll try to evacuate more civilians and deliver aid in the next few days," he added.

The UN's humanitarian chief, Valerie Amos, quoted by Haq, hailed the start as a "breakthrough" and describing it as "a small but important step toward compliance with international humanitarian law."

Activists frequently report severe food and medical shortages, with some 3,000 people – including more than 1,200 women, children, and elderly people – trapped in Homs, surviving on little more than olives and grass.

On Friday, Red Crescent volunteers aided frail-looking old men wrapped in blankets board a bus, as a woman on a stretcher waited her turn.

The United Nations said they were among 83 civilians evacuated under a three-day "humanitarian pause."

"The people who were able to leave were women, children and the elderly," said Haq. "They were then delivered to the places of their choice escorted by UN and Syrian Red Crescent staff," he said.

An amateur video filmed by activists in the nearby Waar area showed a man smiling as he embraced his son, in their first reunion for more than 18 months.

The evacuations were expected to resume Sunday, a local cleric said.

"On Sunday, we plan for many women and children to leave," Abdul Hareth al-Khalidi told AFP via the Internet.

The Syrian Observatory for Human Rights said five of those evacuated on Friday were children, while 17 were women.

Large areas of Syria's third city, dubbed "the capital of the revolution" against President Bashar Assad, have been reduced to rubble by fighting between rebels and government forces.

UN World Food Program staffers in blue vests attended the evacuation, and a vehicle with the logo of the refugee agency UNHCR was parked nearby.

The government agreed to observe a "humanitarian pause" and opposition activists in Homs said the rebels had agreed to a ceasefire.

The army launched a string of massive offensives to recapture rebel areas in the Old City in early 2012, with near-daily bombardments killing thousands.

Assad's forces imposed the blockade in June 2012 after recapturing most of Homs, pushing the rebels into a small enclave in its center.

The plight of the trapped civilians was on the agenda of peace talks in Switzerland last month that broke up without any agreement on access for relief supplies.

A second round of Geneva peace talks, co-sponsored by the United States and Russia, is due to open on Monday.