New legislation promises to ease requirements for descendants of Jews exiled in 1492 to reclaim their Spanish citizenship, but hurdles remain

In recent months, rumors of Spanish intentions to grant dual nationality status for the descendants of Jews expelled in 1492 sent many Israelis to lawyers and the Latin American Olim Association to find out if they would be eligible for the coveted citizenship.

Some in that demographic say this "rights a historical wrong." For others, Spain is a financial springboard to Europe. But it is likely that these potential Spaniards will have to wait awhile before they actualize their new-found right to their citizenship. Over the weekend, 522 years after King Fernando II and Queen Isabella I signed an edict ordering the expulsion of Sephardic Jews, the government in Madrid approved a law permitting the descendants of those expelled to claim Spanish citizenship without conceding the citizenship of the country of their residency. 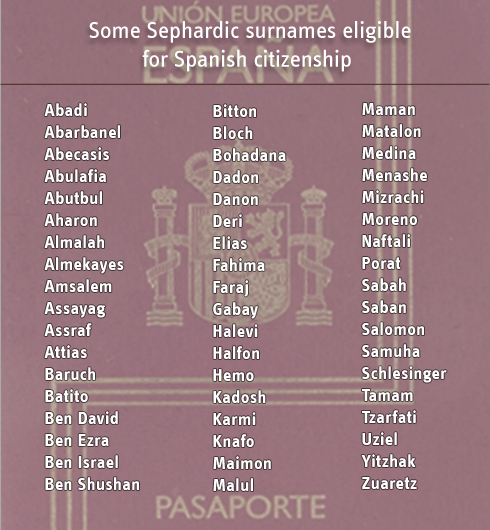 Photo: Shutterstock
Estimates place the size of the eligible demographic at 3.5 million Jews. The amendment to the law grants citizenship upon request, provided the applicants prove their ancestry through their family name, language skills, inheritance, or their cultural ties to Spain.

Chairman of the Olim Association of Latin America, Spain, and Portugal Leon Amiras is skeptical of the Spanish legislature's intentions: "On one hand there is the feeling of coming full circle, but on the other hand it doesn't look like this will proceed successfully because of bureaucratic problems." He said, "The authority given to the Jewish Federation in Madrid to decided who is entitled to the citizenship will be complicated because the federation is staffed by volunteers who can't process the mass amount of applications that will be submitted simultaneously." More than a few Israelis boast about their Spanish roots, including noted actor Moni Moshonov who was born to Bulgarian immigrants. "They say our roots link to Spain and – honestly – until today I wasn't interested in this topic," he admitted. "I think Spain could be the opening for a lot of Israelis who want to go to Europe, whether for pleasure or for work. Personally, I'm not interested. As of now, I'm staying in Israel and I have no intention to leave."

'Ticket to a better future'

Unlike Moshonov, many Sephardic Jews have turned to professionals for document translations to prove their Spanish roots. Olim Association chair Amiras urged patience: "Until I see the Spanish approving citizenships, I'll continue to doubt this move, which I think was intended for public relations."

He expressed an additional concern: "Another hurdle could be residents of Peru or Colombia who have Jewish surnames from the past, but today live with no connection to Judaism. For them Spanish citizenship is a ticket to a better economic future in Europe." Maya Weiss-Tamir, a lawyer who handles Israeli applications for Spanish citizenship, says that current standards require Israeli applicants to live in Spain for two years and give up their previous passport; the new legislation will remove these barriers. Mordechai Ben-Abir, an 88-year-old man from Beersheba, made aliyah under the name Marcus Cabalero. He had previously tried to get Spanish citizenship, but was asked to concede his Israeli passport. "I would never give it up. The fact that it is no longer required is a tremendous achievement. I have been consumed by this issue and I believe I will be the first to act on getting the Spanish citizenship, righting a wrong against Sephardic Jews."

Ben-Abir said he finished his doctorate thesis at the age of 82, "only to discover my Spanish roots. I think I'm the only person in the world who has scientifically proven his connection to the Spanish expulsion. I managed to trace my roots from 1200 to today."

Despite the growing interest, Weiss-Tamir has lower expectations: "In November it was announced they would write new legislation to grant automatic citizenship to anyone who can prove that he is a descendant of Spanish Jews. Not much has happened since then, until yesterday when they discussed the proposal – an amendment that will facilitate the citizenship process."

She added: "It's still ongoing. The law will lighten the burden on the descendants of the expelled and will define their unusual circumstances. The law will allocate a specific time frame for submitting applications. A certificate from the federation of the Jewish community in Spain, a well-known organization, is required, but they have yet to receive from the authorities the criteria for issuing the certificate – so it's all up in the air."

Weiss-Tamir's office is inundated with files of Spanish exiles: "People want to work, to live there, and there are sentimental considerations too." Still, the descendants of the men and women expelled from the Iberian peninsula are running into difficulties proving their familial ties from centuries ago, "On the way proof was lost, and there was a Holocaust, but there are people who have data that goes back many years."