At a secret site in Germany, after World War II ended, Americans used the services of Nazi scientists to develop advanced techniques for the investigation of Soviet prisoners, including the use of "truth serum" (LSD) and mind controlling methods which they would use on prisoners.

American journalist Annie Jacobsen gives an account of this story in her book "Operation Paperclip: The Secret Intelligence Program that Brought Nazi Scientists to America", which was published this week.

"Operation Paperclip" began at a secret scientific base on German soil and was pursued in the United States, where 1,600 of Germany's best scientific minds were moved along with their families – instead of being ostracized and tried for war crimes, they effortlessly slid into the American dream.

The doctors and elite Nazi scientists helped the Central Intelligence Agency (CIA) and the US intelligence system test the use of LSD and other investigative techniques that would help them extract information from the Soviet spies they had caught. The work took place in a German base named "Camp King", near Frankfurt. In 1945, the site served as a detention center for the German scientists, but within three years, the detainees were the Soviets, while the German scientists became collaborators with the Americans. 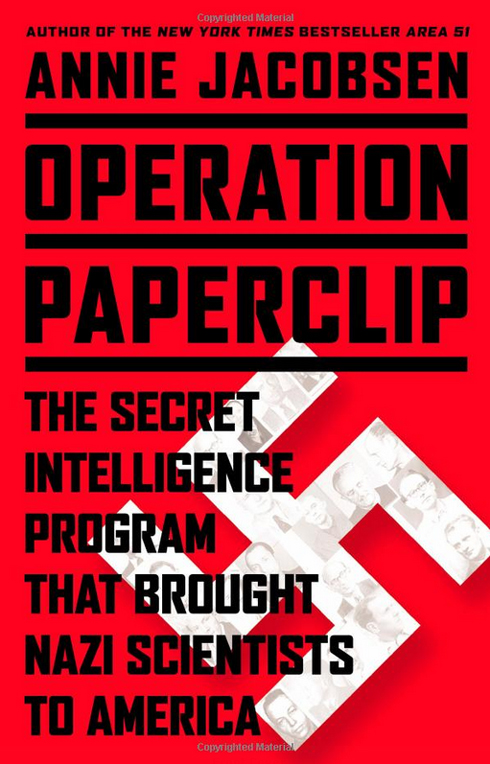 An important asset for the Americans was Dr. Walter Schreiber, the Third Reich's former Surgeon General who was later moved to an Air Force base in the US. The services of former Deputy Surgeon General of the Third Reich Dr. Kurt Blome, who was involved in biological warfare research, were also used in the base.

The motive behind the establishment of "Operation Paperclip" was a suspicion raised by top security and military American leadership's memos – that the US and the Soviet Union may enter a "total war" in 1952, a war that will include the use of nuclear, chemical and biological weapons. For that reason, the Americans decided to use every means at their disposal, including Adolf Hitler's top scientists and the chemical warfare they developed under the Third Reich, including sarin gas and biological weapons.

US scientists worked alongside Hitler's scientists in the Pennsylvania base on developing LSD, a hallucinogenic type of drug, which would become a potential weapon, employed to make enemy soldiers in the battlefield lose control without killing them.

But the CIA soon showed an interest in using LSD outside of the battlefield, and in intelligence warfare. At the time, Americans were examining options of mind manipulation by using drugs, hypnosis and electric shock, in an attempt to match similar Soviet techniques of interrogation. The Americans the realized that LSD allows for a better understanding of changes in human behavior, as well as for performing cognitive manipulation to control people's minds. As a result, Operation Bluebird was launched, an operation meant to utilize drugs to brainwash Soviet spies so that they forget the content of their conversations with Americans.