Denmark has effectively outlawed kosher slaughter, with new regulations signed into law and expected to go into effect Monday. Denmark’s Agriculture and Food Minister Dan Jørgensen approved a new regulation which stipulated the slaughter of animals cannot be undertaken without first stunning them, a move incongruent with kosher laws, the World Jewish Congress said. 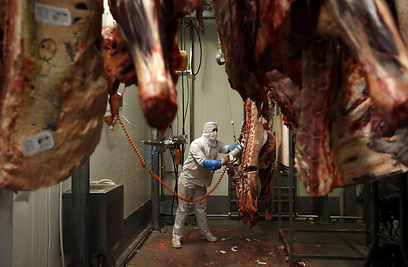 Jewish slaughter house (Photo: Reuters)
According to the WJC, the move will have little actual consequences for the 6,000 strong Danish Jewish community, because all kosher meat sold in the country has been imported for the past decade. Nonetheless, under the new regulations, local slaughterhouses will no longer be allowed to apply for an exemption to the now mandatory pre-stunning.

Israel's Chief Rabbi David Lau called on the Danish government to overturn its decision, saying "This is a serious blow to the Jewish faith and the Jews in Denmark." The rabbi further claimed that kosher slaughter is "the most humane" form of slaughter and minimizes animal suffering.

Jewish and Muslim communities in Denmark were both openly critical of the move, saying it tramples on their religious rights.

But according to the WJC, Jørgensen rejects the claim. “When they are upset about the ban even though they have not taken advantage of the exemptions available, it can only be because in the future they would like to carry out slaughter without stunning," WJC quoted him as saying.

The EU Commissioner for Health and Consumer Policy Tonio Borg told a Jewish leader during a meeting in Brussels on Thursday that the move "contradicts EU law", the European Jewish Press reported. Borg told Rabbi Menachem Margolin, who heads the European Jewish Association, that he intends to ask the Danish government to provide clarification on the matter. In response, Rabbi Margolin told Bord that, "It has been proven scientifically that kosher slaughtering does not allow the animal to feel pain,” adding that it "does not inflict more pain to animals than other methods commonly used in Europe."