Thousands march in West Bank: There will be only one state

Rightist ministers, MKs protest: There will be only one state

In show of force, MKs, ministers from Right lead thousands strong march in West Bank to tell PM he does not have mandate to divide land or Jerusalem. 'There will be only one state between the Mediterranean Sea and the Jordan River,' minister says

Rightists ministers and Knesset members led a march together with thousands in support of Israel's right to live and build in the West Bank. The march was held in Ma'ale Adumim and, according to the organizers, called on the government to block international pressure on Israel with an adequate Zionist response.

The march continued for 4 km until the until the line marking the E-1 area, where the demonstrated gathered to send Prime Minister Benjamin Netanyahu a message according to which he does not have support for dividing Jerusalem or giving up land. They called on him to "stop groveling before the world's demands." 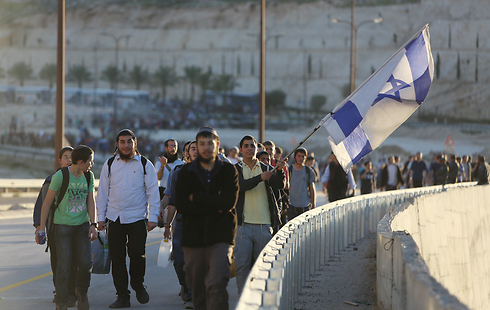 Housing Minister Uri Ariel (Bayit Yehudi) said before the gathering that "the masses marching here represent the absolute majority of the people unwilling to bow and surrender to threats and demands. They understand that from Mevaseret to Ma'ale Adumim, together with all of Judea and Samaria, are an integral part of Eretz Yisrael (the Land of Israel) and Eretz Yisrael belongs to the people of Israel." Ariel further said that "there are those, unfortunately, that think that if we grovel and appease the world it will bring us peace. But it must be said clearly: We are here to stay. There will be only one state between the Mediterranean Sea and the Jordan River." 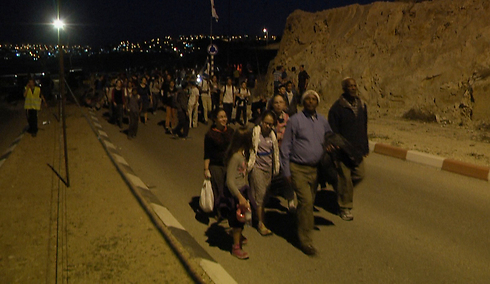 Marching into the night in E1 (Photo: Eli Mendlebaum)
Deputy Foreign Minister Zeev Elkin (Likud ) said "we are here today to tell the world that this is our land, and we have a right to build here. (Netanyahu) once said that 'we want continuity from the greater Jerusalem area from west to east, and the Palestinians want continuity from north to south, someone will have to come out victories.' The prime minister was right. It's us or them, and we're going to win." He further added that "We are committed to the citizens of Israel who voted for us, not to world nations." Deputy Defense Minister Danny Danon spoke during the gathering and said "we are telling the prime minister, the Likud is not a contractor for (Justice Minister and chief negotiator) Tzipi Livni and (Meretz Chairwoman) Zehava Gal-On. "During his first tenure, Netanyahu built in the Har Homa area, like now, then the Americans pressured and threatened us, and the Palestinians threatened as well, and today there are 6,000 units there, like there will be here." 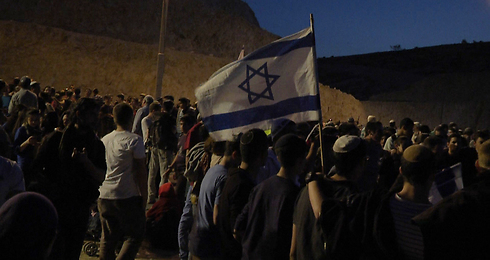 Coalition Chairman MK Yariv Levin said "we are here because this is our land, we are because of our legal historical, religious and national right, and no one will uproot us. No one will prevent us from turning this land into a fruitful and blooming place were Jews can live and raise their children for generations. I say this with certainty: There are hardships and obstacles along the way, but we will overcome. The truth will win."

The son of former prime minister Yitzhak Shamir and Agriculture Minister Yair Shamir (Yisrael Beiteinu) said "I come to politics to promote and strengthen the settlement, and to remove the doubts regarding our way." The gathering was also attended by MK Tzipi Hotoveli (Likud), Transportation Minister Yisrael Katz, MK Miri Regev and MK Ofir Okunis.