Gaza's Hamas authorities have blocked a UN refugee agency from introducing a book promoting human rights into local schools, saying it ignores Palestinian cultural mores and focuses too heavily on "peaceful" means of conflict resolution. Motesem al-Minawi, spokesman for the Hamas-run Education Ministry, said Thursday the government believes the UNRWA curriculum does not match the "ideology and philosophy" of the local population. 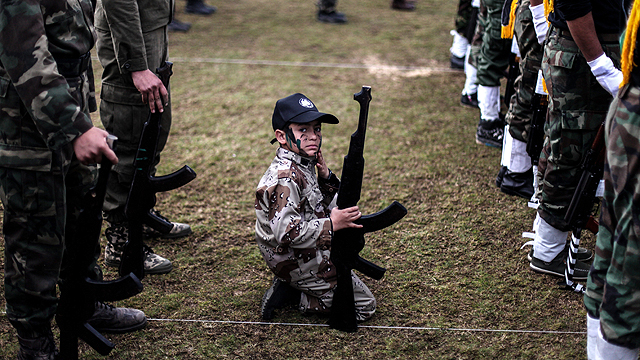 Youth in Hamas training camp. Gaza
He said the textbook, used in grades 5 through 9, did not sufficiently address Palestinian suffering and did not acknowledge the right to battle Israel. "There is a tremendous focus on the peaceful resistance as the only tool to achieve freedom and independence," he said.

UNRWA spokesman Chris Gunness says the agency has "no plans to change its education programs in Gaza."

Last November, Hamas announced it had added studies to encourage "resistance to Israel" to the territory's public schools curriculum.

They were intended to instill "faith in the role of the resistance to win rights and to raise awareness of the importance of effective preparations to face the enemy," he said.

"All of Palestine from the (Mediterranean) sea to the river (Jordan) belongs to us, to us Muslims," it states, in accordance with the beliefs of the militant Islamic group, which refuses to recognize Israel.

The new courses will be taught only in education ministry schools and not those of the United Nations Relief and Works agency, in which close to half of the 463,000 pupils in the strip study, the agency's operations director Robert Turner told journalists at the time.

At the start of this year, Hamas launched an experimental program of basic military training for about 10,000 high school students.