Egyptian border forces destroyed tunnels leading into Gaza from Sinai as part of new campaign to create a buffer zone along the border with the Gaza Strip, Palestinian news agency Ma'an reported.

According to the report, 10 tunnels and seven homes were destroyed on Saturday as part of the new plan to create the buffer zone, which would extend 500 meters in some places, the report claimed. 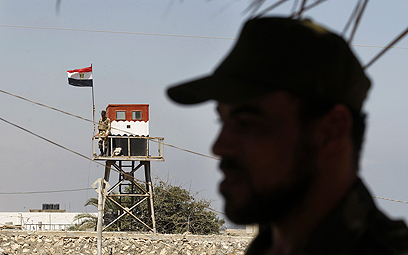 According to Ma'an report which cited an Egyptian security source, the campaign began with a military operation in the border town of Rafah, where tunnels leading into Gaza were targeted.

The security source added that the tunnels were destroyed and the homes they were located in were subsequently blown up.

He explained that the move was part of a wider campaign being led by Egypt to set up a buffer zone along the border with Gaza in Rafah that would extend 300 meters in populated areas and 500 meters in open areas.

According to Ma'an, the zone would pose a threat to dozens of Gaza homes, which has been divided by the international border since the 1982 Camp David peace accord between Egypt and Israel.

According to the report, thousands were displaced in the early 2000s when Israel demolished homes to build a similar buffer zone on the Palestinian side of the border with Egypt.

The Egyptian security source also told Ma'an that Egyptian army forces successfully foiled three explosive devices placed in military vehicles and armored cars in Sheikh Zuwaid, including two that were placed near the Sheikh Zuweid Hospital and a third on the road to a nearby village south of Sheikh Zuewid. 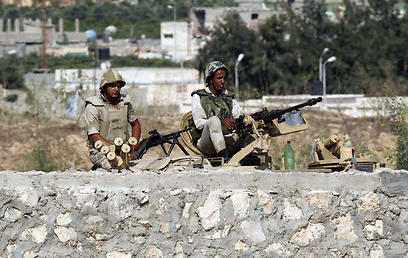 The report highlights the rising tensions between Islamist active in Sinai and the Egyptian regieme working to root them out. The tensions have been on the rise since Egypt ousted Mohammed Morsi, a member of the Muslim Brotherhood, Hamas ' sister group.

He added that army forces raided "militant strongholds" in the a Sinai village south of Sheikh Zuweid and destroyed three homes and five "hideouts."

They also destroyed an olive grove that was reportedly used to hide militants following attacks taking place on the nearby road to Rafah International crossing.

Egyptian armed forces launched large scale military action against terrorists and militants in the Sinai Peninsula earlier in September, in what officials described as the largest mobilization of force in the area since the 1973 Yom Kippur War .

Until July of this year, Ma'an reports, tunnels connecting Gaza to Egypt provided a vital lifeline for the territory which has been under an Israeli-Egyptian blockade which has been in place since 2006.

Since the Morsi's July ouster, Egypt has strictly enforced its side of the blockade, specifically targeting the illegal tunnels.

Egyptian Maj. Gen. Ahmad Ibrahim said in October that nearly 800 tunnels had been destroyed since the beginning of the year at that time, while Rafah officials estimated in September that these operations had demolished 95% of previously existing tunnels, Ma'an reported.