Iran on Wednesday blamed Israel for a double suicide bombing in Beirut that killed four people near an Iranian cultural center in earlier in the day.

A statement from the Iranian Foreign Ministry "strongly condemned" the attack in a Hezbollah-controlled Shi'ite stronghold, and accused Israel of carrying out the bombing in an attempt to destabilize Lebanon after the recent formulation of a new government.

However, the twin suicide bombing was claimed by an al Qaeda-linked group, which said it was a response to the military intervention of Iran and Hezbollah in the Syrian war.

The army said the rush hour attack in the Shi'ite southern suburbs of Beirut was carried out by two suicide bombers driving cars packed with explosives. Similar tactics were used in a twin suicide attack on the nearby Iranian embassy in November.

The Abdullah Azzam Brigades, a radical Sunni group, claimed responsibility for the latest attack, which wounded more than 100 people and was described by Lebanon's Sunni Prime Minister Tammam Salam as an act of terrorism.

In a post on Twitter, the Brigades said the Iranian culture center was the target. It described the "twin martyrdom operation" as retaliation for Hezbollah's role in Syria and pledged more attacks.

The judge investigating the attack said a total of 160 kg of explosives had been used in the bombing. The Iranian ambassador in Lebanon said the dead included a Lebanese policeman who had been guarding the cultural center, but none of its staff were wounded.

The area is controlled by the Shi'ite movement Hezbollah, which is fighting alongside President Bashar Assad's forces in neighboring Syria in a conflict that has fuelled tensions between Sunni and Shi'ite Muslims in Lebanon.

Three years of civil war in Syria has spilled over into Lebanon, exacerbating Sunni-Shi'ite tensions and triggering violence, including frequent clashes between armed groups in the northern city of Tripoli. The war has also affected Lebanese politics, leading to paralysis in government.

The explosions went off about 20 meters (yards) from the Iranian center, blowing out the windows of a nearby orphanage run by a Sunni charity.

Children were peering out and screaming "bomb, bomb." Some were crying. A man working at a sweet shop opposite the bomb site said the blast shook the entire area.

"We heard one explosion and then another," he said.

Human remains were found nearby. The casualties included a number of children. 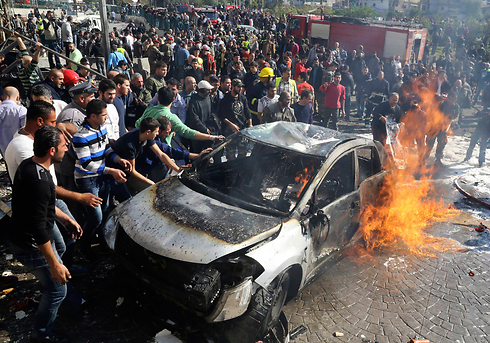 Radical Sunni Islamists sympathetic to the anti-Assad rebellion have pledged to attack Hezbollah on Lebanese soil for helping Assad, a member of the Alawite offshoot of Shi'ite Islam who is also backed by Shi'ite Islamist Iran.

Hezbollah leader Sayyed Nasrallah on Sunday said his group would continue to fight in Syria, describing Hezbollah's involvement there as necessary to stop the spread of radical Sunni militancy.

"Hezbollah will not withdraw from a battle it deems necessary on a strategic level," Ali Ammar, a Hezbollah MP, told journalists at the scene of the blast.

Hezbollah blamed Saudi Arabia, a Sunni power that backs the Syrian opposition, for the November attack on the Iranian embassy, one of a series of car bombings targeting Shi'ite areas in Beirut and eastern Lebanon.

Wednesday's attack, the seventh in the southern suburbs since July, occurred near the Kuwaiti embassy and a Lebanese army barracks. Numerous Lebanese politicians also live in the area, which is not far from Beirut airport.

Soldiers secured the area as fire trucks and ambulances raced to the scene. The charred and twisted remains of a number of cars were seen at the blast site. One was flipped onto its roof.

A wounded man was carried away on a stretcher and a young girl was evacuated by two men. Glass covered the road and the facades of nearby buildings were torn off.

Lebanese security forces last week arrested a man identified as the al Qaeda-linked mastermind of the recent car bomb attacks. The arrest of Naim Abbas was followed by a security sweep that resulted in the seizure of a number of cars rigged with explosives and ready to be deployed.

"The attack on the Iranian cultural centre is a response to the fighting by the Party of Iran (Hezbollah) side by side with the criminal regime in Syria," the Abdullah Azzam Brigades said in their statement.

"We will continue, with God's strength, to target Iran and its party in Lebanon ... to achieve our two just demands: One, getting the fighters of the Party of Iran out of Syria; Two: releasing our prisoners from the oppressive Lebanese prisons."

Prime Minister Salam, who on Saturday finally managed to form a government grouping rival parties after the country went 11 months without a cabinet, condemned the latest attack.

"Amid the positive atmosphere that followed the formation of the government, terrorism has struck a new blow to Lebanon through this bombing ... which underlines the determination of the forces of evil to hurt Lebanon and its citizens and sow discord," Salam said in a statement.

Heavyweight Lebanese Sunni politician Saad Hariri, who is backed by Saudi Arabia, last week vowed to fight Sunni radicalism in Lebanon, calling on his followers to emulate the moderate example set by his father, the late Rafik Hariri.