Suspects being brought in for questioning over AKIM center shooting

A couple and their two teenage children were held for questioning Wednesday morning on suspicion they were involved in a shooting at a Tel Aviv center for the mentally handicapped.


Shots were fired at an AKIM (National Association for the Habilitation of the Mentally Handicapped) center in Tel Aviv on Monday afternoon, two days after it was opened. One of the center's tenants was in the room lying on her bed when the shooting occurred, but she was unharmed.

Police opened a special investigation into the shooting. The center's owners claimed that some in the neighborhood did not want people with mental disability to live there.

Investigation found that the center's owners received numerous threats in the past two weeks. The shooting, that left two bullet holes in the center's window, was just the latest in a series of incidents that included pouring oil on the stairs, sabotaging the front door's lock and personal threats to the center's manager.

Forensic experts that examined the bullet holes determined that the shooting was intentional. Police compiled a list of neighborhood residents that own firearms, and forensics determined the angle and direction from which the shots were fired. 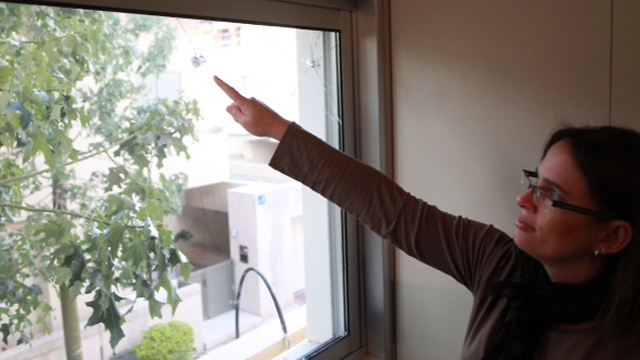 Bullet holes in the AKIM center's window (Photo: Motti Kimchi)
The investigation eventually led to the family being brought in for questioning Wednesday. Police will decide whether or not to arrest the family members after questioning. Tel Aviv Mayor Ron Huldai arrived at the center and was briefed on the investigation by the Yarkon Police Chief Commander Yehuda Dahan. The family's attorney, Shahar Mendelman, said that "this is a normative family and there is no connection between (the family) and the suspicions. There is and there (never) was any motive to harm the neighbors' house." AKIM CEO Sigal Peretz-Yahalomi said she was not surprised by the shooting. "The center's residents have been harassed for the past three weeks. The house's entrance was blocked by parked cars, the lock was sabotaged, oil was poured on the stairs and the center's manager was threatened. The shooting is a serious escalation," Peretz-Yahalomi said. "We didn't want to take this to the media until now to stay on good terms with the neighbors, but enough is enough," she added. Peretz-Yahalomi said she was not surprised that this family was held for questioning. "This neighbor made some outrageous comments in the past. He said our tennants will hurt his children and defecate in the street," she said. "He's just one man that I'm sure does not represent the entire neighborhood. I'm sure this chapter is done and that from now on, there will be great love among the neighbors." President Shimon Peres was also outraged upon hearing about the shooting. "I could not believe this sort of thing can happen here," he said. "This is a sickening phenomenon. We must not let it go unchecked. Even if this is an isolated incident, it's simply disgraceful. People with disabilities should not be afraid to lead a normal life. We were all created in the same form and we must not abuse that," he added. The AKIM hostel can house up to eight tenants, but currently only houses three, the Ministry of Welfare and Social Services said on Monday.

"This is an extremely grave incident," Welfare Minister Meir Cohen said. "I refuse to believe that this is how we look. We will determinedly fight this phenomenon."