Knesset's Special Committee for the Equal Sharing of the Burden deliberates on most volatile article of the formulated bill, suprisingly faced with disclaimer by Bayit Yehudi MK, requiring an additional future vote

After much disagreement among the coalition, The Knesset's Special Committee for the Equal Sharing of the Burden Bill, headed by Knesset Member Ayelet Shaked, convened Wednesday evening to vote on the most dramatic article in the much-debated bill, which concerns the imprisonment of haredim who dodge military or civil service (criminal sanctions).

The committee members approved the issue of the sanctions, though to the astonishment of the participants, MK Moti Yogev (Bayit Yehudi) filed a request for a renewed vote (revision), setting an additional vote on the matter at a future date.

MK Omer Bar-Lev (Labor) criticized the procedure: "As one who aims for an equality of burden, I am appalled to see how the coalition of interests steers the ship without direction, while forgetting the true goal of the bill – increasing equality. I hope that eventually we could change the law for the better."

Committee member MK Ofer Shelah (Yesh Atid) sounded a bit more optimistic at the end of the deliberations: "The burden of equality bill is essential for the continued existence of the IDF as the nation's army and for the existence and the prosperity of the Israeli economy. It will immediately bring out tens of thousands of haredim, who are supported by State budget, to the workforce, and will dramatically increase the number of haredim who serve in both military and civil service.

"For the first time since the establishment of the State it was determined that if haredim will not be recruited under a quota set by the government, they will carry a recruitment duty just like any other citizen in Israel. It was one of Yesh Atid's primary election promises, and it was exercised to the fullest, without compromises or sacrifices." 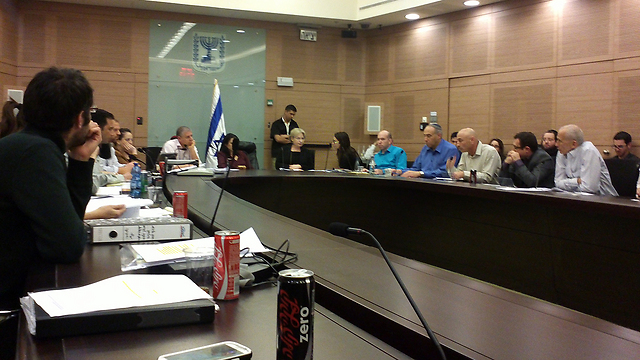 Minister Ya'akov Peri pledged that the rule of conscription would be a guiding principle in the new recruitment law: "For the first time since the establishment of the state, a haredi defector will face the same consequences as a secular defector. The Tal Law era has ended. No more discrimination between blood and blood."

Outline for equality of burden

The discussion began with the issue of deferment for haredim until the age of 26, at the end of an agreed interim period (the year 2017). MK Ofer Shelah (Yesh Atid) filed a disclaimer on the subject and requested to lower the deferment age to 24, in order to facilitate the employment integration of haredim at a younger age; the committee's vote dropped the disclaimer.

According to the proposed bill, the law of equality of burden will be applied on July 1, 2017, when every haredi man will be required to report for the IDF recruitment process.

The draft targets will be carried out gradually according to the proposed outline: In 2014, the IDF and civil service will recruit a sum of 3,800 haredim, 4,500 will be recruited in 2015, and 5,200 will be recruited afterwards. According to the proposal, the yeshivas will be the ones to choose which students are to be considered "exceptional scholars" and thus will be exempt from service, and if they do not meet the quotas – arrest warrants for draft dodgers will be issued. According to the committee's estimates, the annual recruitment cycle for haredim (aged 18) stands at 7,500 to 8,500. The number is then subtracted with those who cannot serve in the army, for reasons such as medical state or general incompatibility, which are estimated at 10% of the draft cycle. The bill will be brought for a second and third reading with the Knesset in the beginning of next month. It includes three and a half years of an interim period with six months of "adaptation period", as defined by the bill, and another six months in which the defense minister will not be able to issue induction orders for haredim. The approval of the bill's articles was made possible after Prime Minister Benjamin Netanyahu expressed his support of the position of Finance Minister Yair Lapid on Tuesday in regards to the imposition of criminal sanctions on draft dodgers. Within the talks that lasted into the night, it was approved that the bill's articles which relate to the Hesder yeshiva students (yeshiva program which combines advanced Talmudic studies with military service) will be discussed Wednesday morning, by which the Hesder students will serve an extra month, and thus reach a total of 17 months of service. The committee rejected Wednesday morning the revision on the articles concerning the Hesder yeshiva students, consequently effectively approving the sections.

Haredi MKs were absent from the vote, as well as MK Elazar Stern (Hatnua), who opposes the current arrangement, and MK Omer Bar-Lev (Labor), who opposes what was dubbed as the "deal" – cutting Hesder yeshiva students' service for haredi service.

The Shaked Committee eventually approved Wednesday morning that the Hesder yeshiva students will serve only 17 months. Minister Ya'akov Peri, who headed the committee that formulated the government bill, said after the vote that "it may not be to my liking, but whoever dreams of full equality lives in Utopia." Regarding the possibility that the haredi public would respond with angry demonstrations, the minister said: "I am not nervous because the bill we bring forth is just, sensitive and balanced. We will not apply criminal sanctions if they meet the goals given to them."