Without the Russians, the anti-Semites from Kiev would fight the people of Crimea,' say Israelis living in the tense peninsula.

For the past four years, Jenia Zlotnik from Be'er Sheva has been living in Simferopol, the capital of Crimea, the Ukrainian peninsula at the center of a crisis that threatens to relaunch the Cold War between East and West. And according to Zlotnik, the Russian presence is a blessing.

"At the moment there are no violent incidents," he told Ynet. "It is relatively quiet, thanks to the Russian troops protecting us from Ukrainian anti-Semites."

Zlotnik, a medical student, says that the local and international media has not reported the full story, namely, that  the Russian troop presence is maintaining law and order.

"In light of recent tensions in Crimea, Ukraine is on the verge of civil war, with riots taking place near Kiev, including armed men raiding shops and robbing people in broad daylight," he says. "There have also been numerous murders during the theft of arms and ammunition."

Zlotnik emphasized that he had no loyalty to either side, but that Putin's decision to deploy troops had brought a stabilizing influence to the region.

"I don’t support either Ukraine or Russia, however the situation here would be much worse if Putin hadn't invaded Crimea. I realize that his sole motive is controlling this region; however it is better than having a civil war." 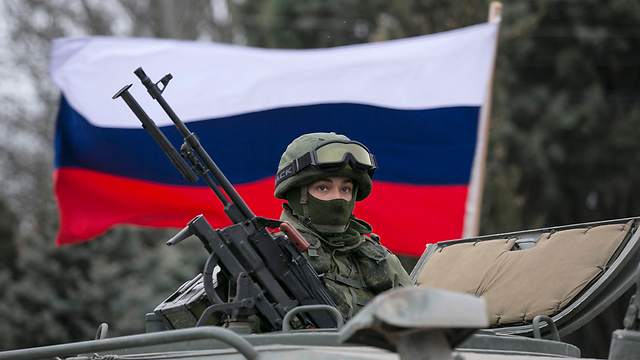 A Russian soldier in the Crimea Peninsula (Photo: Reuters)
The Israeli student added that, "the Ukraine government is hostile towards other ethnicities and uses slogans such as 'Ukraine for Ukrainians'. There are also extremists willing to physically harm non-Ukrainian civilians, including Jews."

Fadi, a 24-year-old Israeli student in Odessa, told Ynet that the effects of the crisis had yet to be felt on the ground in the southern port city, although the economic consequences were already evident.

"There is little tension in Odessa; however one can feel the financial impact as the cost of living becomes more expensive and people don't know what to expect. Most of the people here are pro-Russian, but there those who object to the Russian invasion. There are also lots of rumors flying around. According to a local website, there was an anti-Russia protest outside the embassy in Odessa. (Other) local websites are saying that the naval force based in the Crimean peninsula is being moved to Odessa."

There is no drama in the streets of Odessa either. Fadi says that, "occasionally there are small demonstrations outside government buildings. There are those supporting the Ukrainian government and those wishing for Russia to intervene because they believe, as do I, that the situation in the Ukraine is frightening. Russian and pro-Russia Ukrainians say the people running the government are fascists who instigated the protest in western Ukraine, and claim they are traitors who supported the Nazis during Wolrd War II, and who double-crossed the Russian people."

Meanwhile in Kiev it is relatively quiet, according to Rabbi Hillel Cohen, director of the Kiev branch of the Jewish rescue service Hatzala.

"The barricades and barriers are still present at Kiev's entrances and exits, and protestors still occupy the city center; but the atmosphere is quiet, you don't feel anything drastic and there less police presence on the streets. Having said that, you can feel the tension in the air, as the events in the Crimea Peninsula play out. The word on the streets is that the young men are about to be drafted, and that Putin may also try to take Kiev. The optimists believe the crisis with Russia won't spread beyond Crimea Peninsula border."

In terms of the Jewish community's concerns, the rabbi talks about "fear from uncertainty. For that reason we are currently holding courses in first aid and Jewish burial in cooperation with Jewish emergency services and Hatzala Ukraine."