'I got off cheap,' says Sheikh Raed Salah after receiving eight-month sentence for comments during Temple Mount protest that sparked riots.

Sheikh Raed Salah, the head of the Islamic Movement Northern Branch, is going back to jail after Jerusalem Magistrate's Court sentenced him to an eight-month prison sentence for incitement to violence.

Salah was convicted last November for a 2007 speech he made on the Temple Mount in Jerusalem.

His comment, "Our best moments will be when we meet God as martyrs while Jews are still in the Al-Aqsa Mosque," sparked a riot that left three Border Police officers wounded. 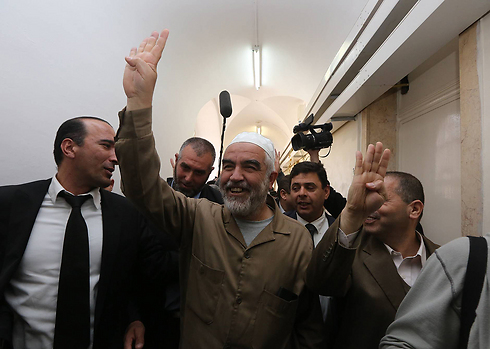 'I got off cheap.' Salah (Photo: Gil Yohanan)

While the verdict was being read, Salah exchanged joking words with Judge Cjana Miriam Lomp.

"Thank God, I got off cheap," he said as the eight-month sentence was handed down. Later, when Lomp described him as a prominent figure in Israel's Arab community, Salah thanked her, to which she quipped: "Yes, but it’s a double-edged sword." 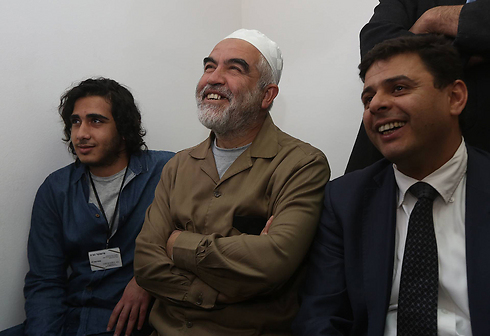 Salah jokes with Jerusalem court judge (Photo: Gil Yohanan)
According to the original indictment filed against the sheikh, the 2007 speech included an active call to violence. The indictment quoted part of Salah's speech from the protest, in which he said: "We would now be on sacred land if it wasn't for the intrusions and interruptions of the Israeli occupier, which God will soon banish as he did those before them." The state prosecutor also initially charged Salah with racism for blood libel references in the same speech: "We (Muslims) have never allowed ourselves to knead the bread we eat after the Ramadan fast with the blood of children." These charges were later dropped. Aviel Magnezi contributed to this report