Merkel in Jerusalem: A different kind of meeting

Op-ed: Despite good intentions and the willingness to listen, the German chancellor is still disconnected from the reality on the ground.

Not too long ago, I received an invitation from the German embassy to meet with a very important person who was coming to Israel. The invitation, which arrived by email, was for a far too early time of the morning. I asked them whom they wanted me to meet, hoping that I could push back the hour on the invitation. With all due respect to the VIP, I have three VIPs at home, and I have to dispatch them to various kindergartens and schools every morning. And unlike diplomats, each of them demands VIP treatment and all have the capricious natures of rock stars. To get from my moshav to Jerusalem by 8am would mean engaging in a full-scale battle with them - and a start time of 5am. A mission impossible indeed, even in light of the diplomatic delight on offer. The political advisor with whom I consulted by phone explained very politely that rescheduling was out of the question. Eventually, he said that I would be meeting with German Chancellor Angela Merkel. The embassy had drawn up a shortlist of several dozen Israelis whom they classed as "other Israelis", and the list shuttled between Berlin and Tel Aviv until only six names remained. A kind of reality show between the German embassy and the German capital.


There are some offers made that absolutely cannot be refused, no matter how early the hour involved. And thus I found myself at dawn on one Tuesday in February, looking spiffy in a jacket, facing three children who had been woken far too early. And after dodging ketchup sprays in an impressive fashion, and with only a half-hour delay, I found myself at the King David Hotel in Jerusalem. I'd missed breakfast, but at least I arrived at Merkel's suite on time. 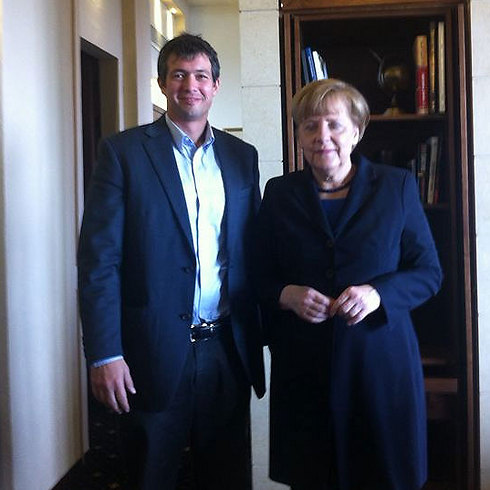