Susan Silverman. 'As a teenager, I was convinced that Jew was just a synonym for Democrat'
Photo: Alex Kolomoisky

Sarah Silverman, my sister the prophet

Don’t let her appearance fool you. Susan Silverman is not just a rabbi and mother of five from Jerusalem. The sister of American comic Sarah Silverman has a sharp tongue of her own, and is not afraid to give an opinion on everything - from the Chief Rabbinate to homosexuality to her naughty little sister.

On the outside, you’d never guess that Susan Silverman is the sister of comic Sarah Silverman, the one with the "gutter mouth" and 4,935,636 Twitter followers waiting breathlessly for her next anti-US government tweet, while Susan leads her seemingly quiet Jerusalem life as a rabbi and mother of five in the sleepy Baka district. But only seemingly, because neither is elder sister Susan a shrinking violet. Aside from her propensity for verbally attacking the Chief Rabbinate at every opportunity, last year she found out what the inside of a jail cell looks like after wrapping herself in a talìt (prayer shawl, traditionally donned only by men) at the Western Wall plaza; and only recently was named one of the world’s "10 sexiest rabbis" by Jewish sex magazine Jewrotica.
Sister Talk
Sarah Silverman discusses 'Jewy-ness'
Ashley Baylen
Watch full video of American comedian, her rabbi sister talking about their upbringing at Boston University.
Sarah Silverman discusses 'Jewy-ness'
The reasons for her being anointed thusly, while not exactly erotic –- wisdom, tenacity, spirituality –- didn’t stop two of Susan’s sisters, Laura and Sarah, from posting a photo of Susan, 50, in a swimsuit, on their Facebook and Twitter pages with the caption: “If rabbis are this sexy, maybe the Western Wall mixed-gender compromise is too dangerous”- a quote from an article lauding her activism in Women of the Wall (WOW), as well as her vision of transforming Jerusalem into the World Adoption Capital – an idea that’s already embodied in her having two adopted children who were born in Africa.

Last year’s first day (Rosh Chodesh) of the Jewish month of Adar was one of the best ever for WOW: Rabbi Silverman was arrested together with her daughter, Hallèl, after wrapping herself in a prayer shawl "in violation of the conventions of the site."

On the other side of the world, in Hollywood Hills, little sister Sarah heard about the incident and expressed her outrage in a tweet that put WOW on the map: "So proud of my amazing sister and niece for their courageous civil disobedience. Ur the tits!" The tweet, needless to say, was quoted around the globe. 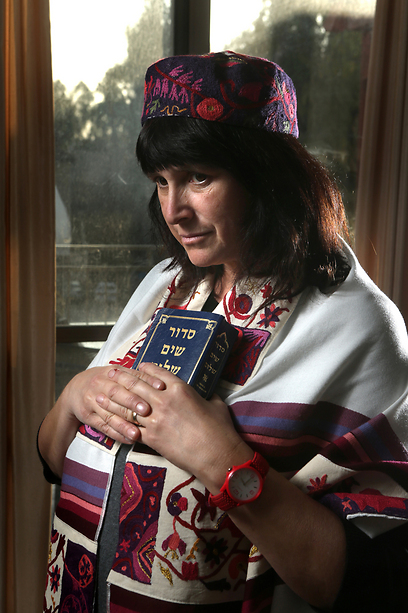 A year later, Susan stresses that it wasn’t she who was behind the publicity. "When we were arrested, it was already nighttime in California. Sarah decided on her own to saturate the cyberspace. I was very pleased, of course. Sarah is a latter-day prophet. Like the ancient prophets, she speaks the truth about society. In biblical times, (the prophets) spoke out about helping the weak and about social justice, just as Sarah does about the rot in our society and our warped priorities. Like her, I try to do the same as a rabbi."

Susan’s arrest could be seen as bad luck, as she hadn’t planned on going to the Wall that day at all, and went only to protect her 18-year-old daughter (from anticipated harm).

"I prayed with WOW at the end of the 1980s, but only now have I come back and gotten involved. It makes my blood boil that Israel is one of the only democracies where Jews don’t enjoy freedom of religion. There’s a sense among the Orthodox that they know what God’s thinking. In my opinion, that’s idol worship, trying to contain God in our thoughts, to diminish God that way."

Why not persuade Sarah to join WOW in light of its success?

"Why should she? She has her path. If she’s here on Rosh Chodesh, of course she’ll come to the Wall. We support one another, but I won’t pressure her. She has lots of important causes of her own. As a latter-day prophet, she has lots to teach the public." 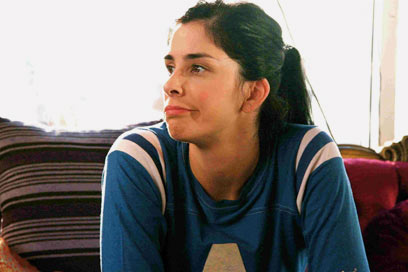 Sarah Silverman. 'I want her to be who she is'

When Susan talks about important goals and prophetic messages, she doesn’t mean her sister’s vulgar jokes poking fun at Jews, God, and the Holocaust. Sarah was recently interviewed wearing a cross, which led to a scolding from her big sister: "I asked her WTF?" says Susan.

"I didn’t say that she’s a Biblical prophet. I said that she’s following in their path. She turns attention to and opens peoples’ eyes to ethical problems, to discrimination, bigotry, and intolerance."

Would you rather she be milder?

"No. I want her to be who she is. She’s the most benevolent person I know. Justice and humanity are manifested in her along with amazing humor. I’d rather hear justice and good-heartedness wrapped in vulgar humor than egotism and closed-mindedness wrapped in words of Torah."

Do you see it as a problem that Sarah dates non-Jews? Some call assimilation "the quiet Holocaust."

"Until eight years ago, I refused to officiate at mixed weddings, until a friend came to me with her non-Jewish boyfriend. She’d tried not to fall in love, but it was stronger than them, and they were simply right for each other. He didn’t want to convert, but said that it would come when he felt Jewish.

"Today they have a Jewish home, they keep Shabbat, and they perform the mitzvót with more intention than many born Jews. Their children are Jewish in every respect. So I thought to myself, 'Why should I push them away?' (Mixed couples) are good for Judaism and will improve our gene pool."

Susan grew up in New Hampshire, but until she attended university, she knew hardly anything about Judaism.

"We grew up not knowing anything about Shabbat or kashrut. Some years we had a Hannukiya, some years a Christmas tree. But what we always had were liberal values. My parents were staunchly anti-Vietnam, for example. As a teenager, I was convinced that 'Jew' was just a synonym for 'Democrat.'

"Actually, looking back, I realize I was right. The values I grew up with were consistent with both. For instance, as early as the 1970s, we learned at home that homosexuality is not a disease. One of our middle sisters has a female partner."

And as a rabbi, that’s okay with you?

"Of course. We’re all created in God’s image. After all, one of the beauties of Judaism is that we evolve: We bring Gemara to Mishna, engaging the realities of God’s world in the words of God’s Torah, creating a messy, evolving tradition. Do we stone wayward children? Those who violate the Sabbath? Do we force a woman to marry someone who raped her?

"While these things are written in the Torah, as a community, over time, we’ve moved forward, balancing human reality and tradition so that both can have greater meaning."

If it wasn’t already obvious, Susan is far from being a classic rabbi. She wouldn’t pass the Torah knowledge test that any average Ponevezh Yeshiva student would: She swears at every turn, and when passersby wave, she explains, "Maybe it’s because I made the Sexiest Rabbis list."

When I ask her if she hands down halachic (Jewish legal) rulings, she laughs. "Halacha is a way, not a law. It’s a human, imperfect, guiding force, not a faceless dictator.

"This morning I was at the Wall for Rosh Chodesh Shvat, and ultra-Orthodox girls yelled at me, 'You’re wearing pants! You’re not a Jew!' and excoriated us for being 'anti-Torah.' Hello! The Holy One, blessed be He, created everything. It’s all in His name. 'Even' us.

"The Orthodox leadership argues endlessly over the effing shape of bourekas, when we have 60,000 refugees here that the Torah commands us to help. Who cares about bourekas? 145 million children worldwide are at risk. Have we made sure they have enough to eat? Do we have time for bullsh*t? If the mitzvot (Torah-based commandments) are only an end unto themselves, then they have no meaning; they have meaning only if they’re part of a greater goal.”

Are you in favor of taking in every refugee?

"We can’t take in all of Africa, but we can’t ignore it either. We have to do right by those who are already here. I didn’t become a rabbi to become part of the ludicrous obsession with the root of the (Hebrew) word 'kasher' or to obsess over kashrut, but in order to truly help heal the world, which I don’t hear (the Orthodox) doing. They’d rather chase after women who have the chutzpa to wrap themselves in a talìt.

"God commanded us three times in the Torah not to seethe a kid in its mother’s milk, and 36 times to help the stranger and the orphan. So for every cent that they spend on kashrut, I expect (the Orthodox establishment) to allocate 12 cents to helping the foreigner among us. Has anyone heard the Rabbinate talk about (doing) that?"

We arranged deliberately to meet at Café Itzik, a Jerusalem institution that has become an anti-establishment symbol after the Rabbinate revoked its kashrut certification, not on a halachic basis, its owners claim.

"I’m pleased to be sitting here," Silverman says. "Maybe it doesn’t have an official kashrut certificate, but it has the social seal of approval, and that’s more important. You think the rabbinate’s kashrut supervisors give a sh*t about how the workers here are treated?"

Would you eat meat at a place like this?

"No. I’m vegetarian. But regardless, I trust the owner: If they say the food is kosher, it’s kosher. Moreover, it has the ethics seal of approval, and that’s more important. Does the Rabbinate care how the workers here are treated?"

So let’s say that tomorrow morning, you were appointed chief rabbi. What would change?

"Everything. The Rabbinate would no longer be a business; it would be a leadership. The priorities would change from chasing after rules and stringency to concern for the weak.

"Not long ago I saw a picture of an ultra-Orthodox Jew boarding a plane wrapped in plastic because the plane was going to be flying over a cemetery. To me it reflected a total cutoff from reality. People are dying all over the globe from disease and starvation, and he’s preoccupied with protecting himself from the 'eminent danger' of flying several kilometers over someone’s grave. Effing crazy!" she roars to the Jerusalem streetside.