The IDF Spokesman's Office released a video Thursday showing the Shayetet 13 commandos during their takeover and capture of the Iranian arms ship Klos C.

The video also shows the commandos searching the ship with their weapons drawn, and discovering the M-302 missiles inside containers below deck.

The hundreds of commandos that took part in the Red Sea operation were still moving north towards the Eilat Port on Thursday - some on Navy ships and others on the trading ship Klos C that was used to smuggle long-range missiles bound for the Gaza Strip. The Klos C, that was flying the Panamanian flag, is now flying the Israeli flag instead. The ships are now some hundreds of kilometers from Eilat and were expected to get there on Saturday.

Additional details of the takeover were released by the IDF Thursday. A senior Navy official said the ship's Turkish captain was surprised to receive a call on the ship's radio from the Israeli Navy commandos, who asked him to stop the boat and told him they intended to board the ship.

"It took him a few minutes to response, but when he was standing on the bridge, looking left and right and seeing two missile boats standing by with more boats filled with commandos ready to go, he gave us permission to come aboard," the official said.

"We quickly made it clear to him that we were not pirates and that we belong to the Israeli Defense Force and want to search his ship," he said. 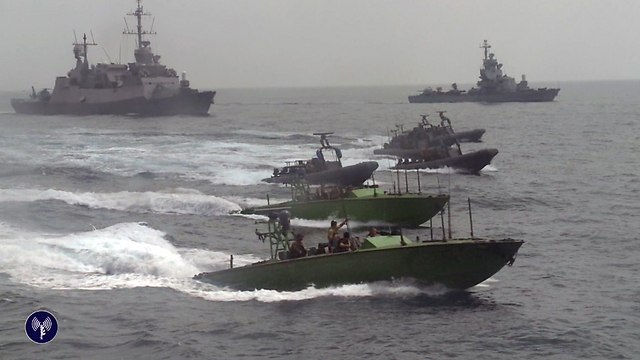 "We started searching through some of the containers that were crowded in the belly of the ship, which forced us to open the containers from the side by sawing through them. When we moved the bags of cement away and opened the boxes that contained the rockets, we brought the captain down there and only then did he realize he was fooled," the official continued. "At this point he described the ship's entire course so far in Turkish and in English and realized he had become a victim of an Iranian conspiracy."

The official noted the captain and his crew did not protest the Navy's search, "because they saw the kind of military might that was around them, among other reasons."

"At the same time, we held a maneuver in the area, where many trading boats pass, in order to make it clear that we do not intend to attack them as well," he added.

On Thursday it was revealed that the Navy ships left the Eilat port last week for the operation, but did not know exactly when the attack will take place. One of the reasons for the decision to raid the ship at 5:30 am on Wednesday was the fact the Klos C was in international waters, the crew's low preparedness to pirates' attacks and the fact the ship was nearing its destination - Port Sudan. From that port, the rockets were to be loaded onto trucks and taken to Gaza.

The operation was supposed to take place a week prior, but because of the height of the waves, the Navy decided to postpone it.

"The Iranians learned that they need to distance themselves as much as possible from the smuggling attempt, which is why they made a stop in an Iraqi port and preferred unloading the shipment fairly far away from the Mediterranean Sea," the senior official added.