In solidarity with Israeli counterparts, haredi community shuts down streets of Manhattan for anti-IDF draft demonstration.

Thousands of ultra-Orthodox Jews filled the streets of lower Manhattan on Sunday to protest Israel's proposal to draft haredi citizens into its army. The gathering took up a stretch of 10 blocks, with dark-clothed demonstrators standing behind police barricades amid tight security. Organizers kept to tradition, with men and women in separate groups as they are at religious events. 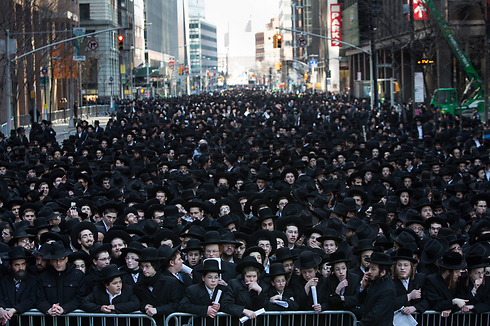 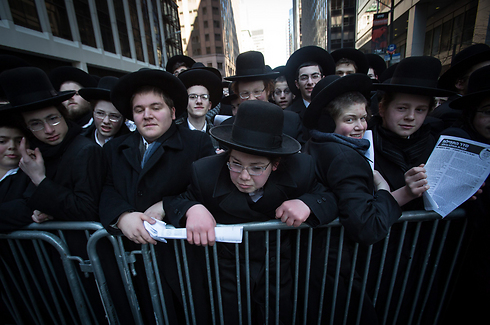 Shmuel Gruis, 18, a young haredi man, was clutching two tomes of Jewish prayers as he hurried to the male section of the rally.

Of the Israeli Orthodox young men who would be affected by a mandatory draft, he said, "These kids, a lot of them don't know how to hold a gun. They don't know what physical warfare is."

"Their whole world and their whole lifestyle is peace and love and in doing mitzvahs," he said, using the Yiddish word for good deeds. "And you take a bunch of kids out of the environment where they come from – in my eyes, it's wrong."

The Knesset is expected to vote on the conscription bill later this month. The bill, which would not go fully into effect until 2017, would impose criminal sanctions on ultra-Orthodox draft dodgers. However, yeshiva students would have the right to defer service until age 26. Sunday's prayer event brought together a community of New York's most Orthodox Jews. Organizers put the crowd count at over 50,000. "We're all united against military service for religious men in Israel because it doesn't allow for religious learning," said Peggy Blier, an interior designer from Brooklyn. "The Israeli government is looking to destroy religious society and make the country into a secular melting pot." A week ago, hundreds of thousands of ultra-Orthodox Jews rallied in the streets of Jerusalem, blocking roads and paralyzing the city in a massive show of force against plans to require them to serve in the Israeli military. 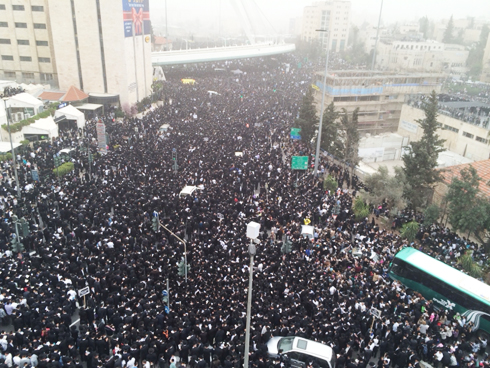 The widespread opposition to the draft poses a challenge to the country, which is grappling with a cultural war over the place of the ultra-Orthodox in Israeli society.

The issue of army service is at the core of that struggle. Since Israel's founding in 1948, the ultra-Orthodox, who make up about 8 percent of Israel's 8 million citizens, largely have been allowed to avoid military service, compulsory for most Jewish men, to pursue their religious studies. Older men often don't work and collect welfare stipends while continuing to study full time. The ultra-Orthodox insist their young men serve the nation through prayer and study, thus preserving Jewish learning and heritage, and by maintaining a pious way of life that has kept Jewish culture alive through centuries of persecution. But the exemption has enraged secular Israelis who say the ultra-Orthodox are not doing their fair share. The issue featured prominently in last year's election, which led to the establishment of a center-right government that has been pushing for reforms that will require ultra-Orthodox to serve in the army.