Israel, US sign agreement securing $429 million in funds for Iron Dome as US general suggest system's upgrade include protection of Egypt and Jordan

The United States and Israel have signed an agreement promising continued funding for the Iron Dome weapon system, with a US general proposing that Israel upgrade the anti-missile systems to include neighboring Jordan and possibly Egypt.

The United States and the Israel reached an agreement on continued support of the production of the Iron Dome weapon system. Under the terms of the agreement, $429 million will be transferred immediately to Israel to support Iron Dome procurement, according to a US Department of Defense press release. 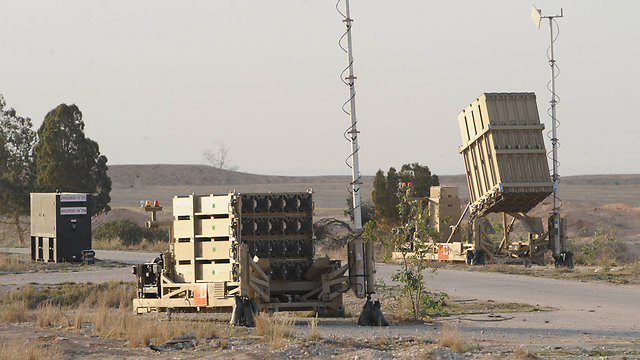 Iron Dome (Photo: Herzl Yosef)
An Israeli official cautiously welcomed the idea to expand the system to include both Jordan and Egypt. Brigadier-General John Shapland, chief defense attaché for the US Embassy in Tel Aviv, raised the idea of extending Israel's anti-missile umbrella in comments to a security conference in the city.

"If we were able to build a regional defense capability in, say, Jordan, that capability could easily defend Israel, Jordan and even Egypt, if you so desired, adding one more layer to your multi-layered defense," he told Israeli officials and experts gathered at the INSS think-tank.

Shapland, whose country has extensively underwritten Israel's two deployed missile interceptors as well as others in the works, and allowed their integration with U.S. counterpart systems, said his proposal was "just one idea to consider".

Yair Ramati, head of the Israel Missile Defense Organization, appeared open to the idea. "The policy of the (Israeli) Defense Ministry is always to cooperate with the countries of the region, including the countries cited," Ramati said at the conference, in reference to Jordan and Egypt.

The Egypt and Jordan have full peace treaties with the Israel and share some of its concern regarding the disputed nuclear program of Iran and the civil war wracking Syria - both states with long-range missile arsenals.

Jordan's Red Sea port of Aqaba is also under threat from short-range rockets fired by Islamist militants in the largely lawless Egyptian Sinai - though they have more regularly targeted the next-door Israeli resort of Eilat. Jordanian officials and a spokesman for the Egyptian embassy declined immediate comment.

"I won't be sharing operational maps with you," Ramati told Reuters. "You can draw your own conclusions from the fact we insist on not answering."

Declassified data on Arrow II's interception range suggest that it could in theory protect much of west Jordan, including the capital city Amman, and eastern regions of Egypt, as well as Israel and the occupied West Bank.

Arrow III, a new version of the system due out by 2016, would be capable of shooting down incoming Iranian rockets over Iraq, designers say - well before they reached Jordanian or Israeli-controlled airspace.

Israel has often posted Iron Dome units to protect Eilat from Sinai rockets. U.S. experts say Iron Dome has an interception radius of some 10 km (6 miles), potentially enough to protect Aqaba, depending on the interceptors' positions.

Security sources in Amman said Jordanian concern over the missile threat had diminished in recent months thanks to Iranian nuclear diplomacy with world powers and Syria's deal to ship out its chemical weapons for destruction abroad.

The former head of the Israel Missile Defense Organization, Aryeh Herzog, said that protecting Jordan had been discussed when he was in office between 2000 and 2012.

"I'm not aware of any current policies on this matter, but certainly they (Israelis) have been talking for many years about the theoretical possibility of using our systems to help the Jordanians if required," he said.