After Jordanian judge was shot five times and killed by the IDF in the border crossing between Israel and Jordan, army maintains shooting was justified because judge attacked the soldiers.

The IDF claim the Monday shooting of Jordanian judge in the crossing between Israel and Jordan was justified because the man attempted to attack soldiers several times before he was shot.

The incident which took place Monday has strained relations between Jordan and Israel. After news broke that the man shot by the IDF in the Allenby crossing was Jordanian Judge Raed Zeiter, protests broke out in Jordan and some called for Israel's ambassador to be expelled and the peace treaty with Israel to be annulled.

The furor led Prime Minister Netanyahu to issue an apology and agree to work with the Jordanians to investigate the incident. Now, those involved in the incident expressed surprised at Netanyahu's apology and the Judge's family maintains claims that the attack attributed to the judge was false. "We plan to sue for compensation," said the victim's family lawyer. 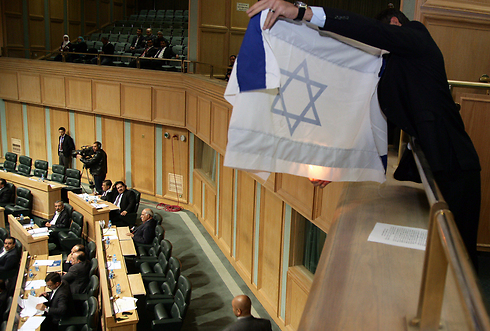 According to IDF initial investigation a bus arrived to the check point with dozens of Palestinians who were on their way back to the Palestinian Authority. At this stage a standard security check was conducted on the bus using a mirrored rod and a security check of the passengers.

The Battalion 76 soldiers charged with securing the border crossing began their security check on the bus and at a certain point the Jordanian judge attempted to snatch one of the soldier's weapon. He was shot in his lower body, but continued to attack the soldier. Two soldiers noticed the attack and opened fire, shooting him at least five times.

Prime Minister Benjamin Netanyahu's office issued a later statement saying it was committed to its peace treaty with Jordan and would establish an Israeli-Jordanian team to look into what had happened. "Israel regrets the death of Judge Raed Zeiter yesterday at the King Hussein (Allenby) bridge and expresses its sympathies to the people and government of Jordan," the statement said.

An engineering corps commander said in response that "it's a shame that the high ranks in the government are getting softer despite knowing exactly what happened, unlike senior army commanders who are backing us." On the other hand, a military official said that there was no contradiction between the prime minister's apology and the military's investigation: "The relationship with Jordan is a strategic asset to Israel, therefore it was crucial to cool down the fray that was starting in Amman. Jordan is a country which we have long border with and good relationship in terms of security, so it was important to calm the tension created following the incident." One of the corps commanders described a sense of pride among the soldiers, who do not face many operational events due to the peaceful relationship with Jordan. "The Jordanian border and in particular the Allenby crossing are considered a 'latent' area, which makes it hard for the soldiers to be alert and prepared for unexpected events," he said.

IDF confirmed Wednesday morning that there would be a military investigation. "After the initial inquiry about the incident which included a questioning of dozens of witnesses by the police and Shin Bet, the conclusions arise the suspect clearly ran towards the soldier screaming 'Allahu Akbar' and trying to snatch the soldier's weapon."

The family's lawyer ruled out IDF version of the event saying "it is unlikely that a law abiding man like him, one of the brilliant judges in Jordan and a father of two will act this way. The place is filmed and documented and we are asking for a complete and serious investigation. Raed Alaa el-Deen, Za'eiter 38 was of Palestinian origins and was buried in the West Bank city of Nablus on Tuesday.

The protests against Israel that started in Jordan continued inside the parliament as demonstrators entered the building and tried to burn a flag of Israel. Chairman of the Jordanian Parliament Atef Tarawneh criticized the act, however stressed that the government attitude towards the shooting needs to be aggressive and insist on a joint Israeli-Jordanian team to complete the investigation to reach the truth regarding the Judge's death.