Search aircraft are investigating two objects spotted by satellite floating in the southern Indian Ocean off Australia that could be debris from a Malaysian jetliner missing for 12 days with 239 people on board.

Australian officials said the objects, the largest of which measured up to 24 meters (78 ft), were around 2,500 km (1,500 miles) southwest of Perth, and appeared to be awash over water several thousand meters deep.

"I can confirm we have a new lead," Malaysian Transport Minister Hishammuddin Hussein told reporters in Kuala Lumpur, where the investigation into the missing airliner is based.

Another official in Malaysia said investigators were "hopeful but cautious" about the Australian discovery.

No confirmed wreckage from Malaysia Airlines Flight MH370 has been found since it vanished from air traffic control screens off Malaysia's east coast early on March 8, less than an hour after taking off from Kuala Lumpur for Beijing.

"New and credible information has come to light in relation to the search for Malaysia Airlines Flight MH370 in the southern Indian Ocean," Australian Prime Minister Tony Abbott told the country's parliament.

"The Australian Maritime Safety Authority (AMSA) has received information based on satellite imagery of objects possibly related to the search." 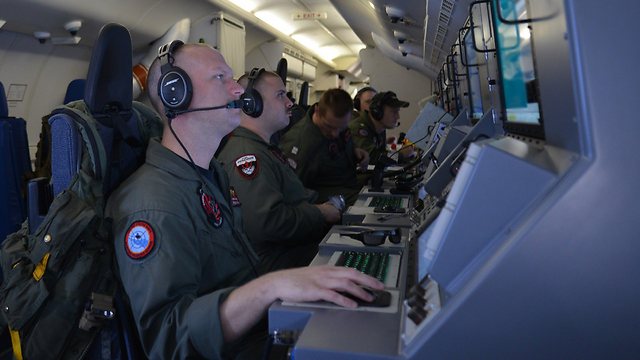 US military help search for missing Malaysian plane (Photo: AFP)
John Young, general manager of the emergency response division of AMSA, told reporters that an Australian air force AP-3C Orion plane was already at the scene, and more aircraft were on the way. A merchant ship diverted for the task was due to arrive in a few hours, he said. "They are objects of a reasonable size and probably awash with water moving up and down over the surface," he said. Young said it could be some days before authorities have anything to report and added that poor visibility reported in the area could hamper the search. "It's probably the best lead we have right now but we have to get there, find them, see them, assess them, to know whether it's really meaningful or not," he said. Prime Minister Abbott said he had already spoken with his Malaysian counterpart Najib Razak and cautioned that the objects had yet to be identified. "The task of locating these objects will be extremely difficult and it may turn out they are not related to the search for MH370," Abbott said.

Investigators believe that someone with detailed knowledge of both the Boeing 777-200ER and commercial aviation navigation switched off the plane's communications systems before diverting it thousands of miles off its scheduled course. Exhaustive background checks of the passengers and crew aboard have not yielded anything that might explain why. Investigators piecing together patchy data from military radar and satellites believe that, minutes after its identifying transponder was switched off, the plane turned sharply west, re-crossing the Malay Peninsula and following an established commercial route towards India. After that, ephemeral pings picked up by one commercial satellite suggest the aircraft flew on for at least six hours. The methodical shutdown of the communications systems, together with the fact that the plane appeared to be following a planned course after turning back, has focused particular attention on the pilot and co-pilot. The FBI is helping Malaysian authorities analyze data from a flight simulator belonging to the captain of the missing plane, after initial examination showed some data logs had been deleted early last month. A Malaysian official with knowledge of the investigations into the pilots said three simulator games that 53-year-old pilot, Zaharie Ahmad Shah, had played were being looked at. "We are following up on the data logs being erased," the source said. "These could be logs of the games that were erased to free up memory, so it may not lead us to anything. He played a lot of games, going into hundreds and thousands of hours." An unprecedented multinational search for the plane has focused on two vast search corridors: one arcing north overland from Laos towards the Caspian Sea, the other curving south across the Indian Ocean from west of Indonesia's Sumatra island to west of Australia. Australia is leading the search in the southern part of the southern corridor, with assistance from the US Navy. The depth of the water where the possible debris has been sighted would likely make recovering the "black box" voice and data recorders that may finally unlock the mystery of what happened aboard Flight MH370 extremely challenging.