A protest against the high costof living in Israel
Photo: Motti Kimchi

'We want justice, not charity,' youths protest in Tel Aviv

Hundreds of people demonstrated at Rabin Square in Tel Aviv Saturday night against the high cost of living, the housing crisis and the social and economical gaps in the Israeli society. Using the slogan "The people demand social justice," the protesters called for a change in government policy and practical solutions.

Shimrit Ben-Zachry, a mother of three, spoke at the rally, telling about her financial hardships, including her husband's unemployment and the rising rent prices. "Many will identify with the phrase 'breathing doesn't mean living'. We wake up in the morning wondering how are we going to make it through the day. Our kids don't get to see their parents because we work hard to survive and when we get home, we are mentally and physically drained", said Ben-Zachry. 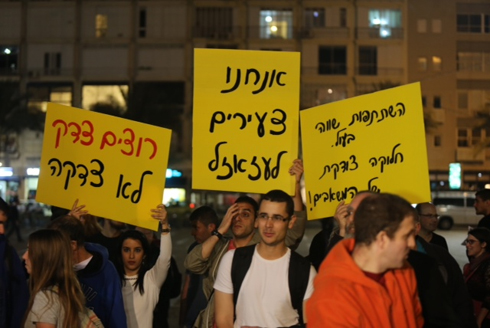 'We want justice, not charity': a protest against the high cost of living in Israel (Photo: Motty Kimch)

Aby Beninman from Rosh HaAyin, who organized the rally, said that one cannot accept the reality of life in Israel, "there is a lost generation here of young people who will not be able to buy a home and get a decent job due to the high cost of living. To me, this is a complete loss of Zionism. Because we cannot wait until the next elections or the future implementation of this or that committee, we came here, to remind our politicians what their recent election promises were."

Lilach Rubin, founder of the Tenants' Association, called on the government to apply the recommended price list for rent on apartments, as well as enforcing a standard rental contract with price criterions. "There are 2 million people renting apartments in this country, it is time to take care of them," she said.

Dr. Itzhak Saporta (Tel Aviv University) said that Isrealis should come together in an effort to make a change on their behalf, especially now when the government seems to take care mostly of itself. "If the people don't become a significant force to reckon with, the government will walk all over them. Citizenship is more than casting a vote every four years; it's an effort of organization. Workers' unions and bank openings are the type of things that need to be groomed. "

MK Mickey Rozental (Labor), who also attended the rally, said that the anger towards the government is enormous as it has been a year since the elections and nothing has happened except for empty promises.

"(Finance Minister Yair) Lapid is operating against the people who elected him. He promised to lower the cost of living, but it only went up. The empty slogans continue while the government has no real intention of making the housing in Israel affordable. The average wage in Israel doesn't allow living in dignity and you get a simmering rage that once erupted cannot be stopped," said Rozental.