'Intactivists' protest against circumcision in Washington

'Forcing children to participate in blood rituals is wrong,' says one of the protesters. 'Religion of one's parents is not a reason to abuse.'

Hundreds of "intactivists" against circumcision protested in Washington on Thursday, with some wearing unusual outfits and holding very graphic signs.


"Circumcision anguish, bloodstained men," "circumcision violates children," "how dare you cut his penis" were just some of the slogans on signs held up by the protesters - men and women alike - who wore all-white outfits with a red "blood stain" on their groins. 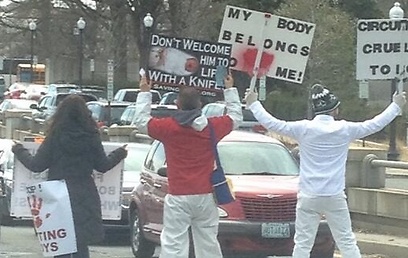 Anti circumcision protest in Washington (Photo: John R Stanton)
"Intactivists" call themselves so because they believe men's privates should remain "intact." They oppose circumcision both for religious purposes and for medical purposes.

"Forcing children to participate in blood rituals is wrong," Jonathan Conte, one of the protesters, told Washington-based news site DCist. "Religion of one's parents is not a reason to abuse," he added. Conte, who was circumcised himself and says he resents his parents for it, was holding up a graphic photo of a newborn being circumcised, DCist reported.

Conte went on to say the US should apply the 1996 legislation banning vaginal circumcision to penises as well. The "intactivists" plan to continue their protests through the weekend in the capital, including a march from the US Capitol to the White House on Saturday. Conte and his fellow "intactivists" might take comfort in a report issued by the Centers for Disease Control and Prevention that found that across a 32-year period from 1979 through 2010, the US national rate of medical newborn circumcision declined 10 percent overall, from 64.5 percent to 58.3 percent.