White House says Obama has yet to decide on Pollard's release, but confirms 'there are obviously a lot of things happening in that arena.' Meanwhile, US spy opts out of parole hearing amid reports he could be freed.

A member of the US Parole Commission said convicted US-Israeli spy Jonathan Pollard has waived a planned parole hearing.

Meanwhile, White House spokesperson Jay Carney said US President Barack Obama has not made a decision on whether to release the convicted US spy.

"Jonathan Pollard was convicted of espionage and he is serving his sentence," Carney said.

"I don't have any other update to provide you on Mr. Pollard's status. There are obviously a lot of things happening in that arena and I am not going to get ahead of discussions that are under way," he said. Carney would not elaborate on the US discussions with the Israelis.

Releasing Pollard would be an extraordinary step underscoring the urgency of US peace efforts. US defense and intelligence officials have consistently argued against releasing Pollard.

US Secretary of State John Kerry is reporedly working on a deal that would rescue the faltering Mideast peace talks, pushing a formula that would include the release of convicted Pollard and freedom for hundreds of Palestinians.

Regarding, Pollard, commissioner Patricia Smoot said Pollard's hearing had been scheduled for Tuesday.

A parole commission administrator, Stephen Husk, said the hearing was to have been held at the prison in Butner, North Carolina, and that Pollard, who is imprisoned there, would have attended. Husk declined further comment. Waiving the parole hearing comes amid diplomatic discussions between the US and Israel about Pollard's possible release to further Mideast peace talks. The possibility of parole was the latest legal avenue Pollard had been taking in an effort to win his freedom.

The 59-year-old Pollard repeatedly sought executive clemency from Presidents Bill Clinton and George W. Bush but was denied. He has been imprisoned since 1985. 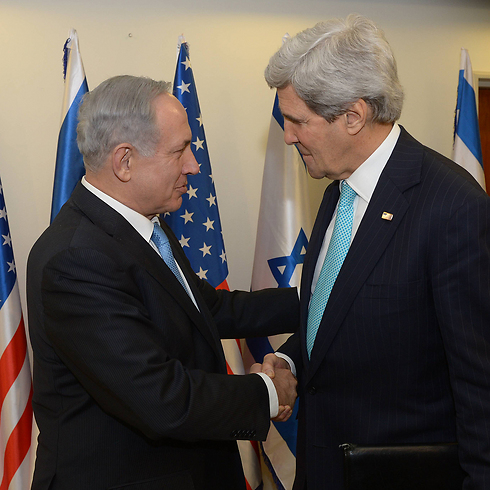 Pollard could be freed from a US jail before Passover, which begins April 14, a senior Israeli source familiar with ongoing peace negotiations with the Palestinians confirmed Tuesday. The deal would also see hundreds of Palestinian prisoners released by Israel and the Palestinians agreeing to extend talks into 2015.

The steps are part of a new proposal by Kerry to resuscitate the US-brokered negotiations between Israel and the Palestinians.

According to the details of the proposal, published Tuesday by the Palestinian news agency Ma'an, Israel will expand the currently on-hold fourth and final release of Palestinian prisoners from 26 to several hundred, including senior Palestinian officials jailed in Israel.

The four releases, each of 26 long-term prisoners involved in deadly terrorist attacks against Israelis, were a goodwill gesture by Israel announced at the start of the talks last summer.

Ma'an also said that Israel would agree to a "quiet freeze" in settlement construction in the West Bank, although not in Jerusalem, which would hold until the end of this year.

Kerry met with Prime Minister Benjamin Netanyahu on Tuesday morning for the second time in less than 12 hours, in an effort salvage the stalled peace talks.

Kerry broke into his travel schedule on Monday for a flying visit to Jerusalem and headed back to Europe again after his early morning discussions with Netanyahu, and was expected back in the region Wednesday.