The jailed leader of Egypt's Muslim Brotherhood scoffed at the series of mass tribunals against his group and demanded judges not let the courts be politicized, speaking from his defendants cage Tuesday at the stormy opening of a new trial of him and 50 others.

The session saw many of the courtroom tensions that have plagued most of the trials so far. Defendants broke out into chants. At one point, the presiding judge screamed "Shut up" at one defendant. All the defense lawyers walked out of the Cairo courtroom to press their demands the judge recuse himself.

In the new trial, Brotherhood leader Mohammed Badie and the other defendants in the case face charges including plotting to bring down the constitution, establish an "alternative government" and kidnap Abdel-Fattah el-Sissi – the military chief who ousted the Islamist president last summer and who last week stepped down from his post to run in upcoming presidential elections. 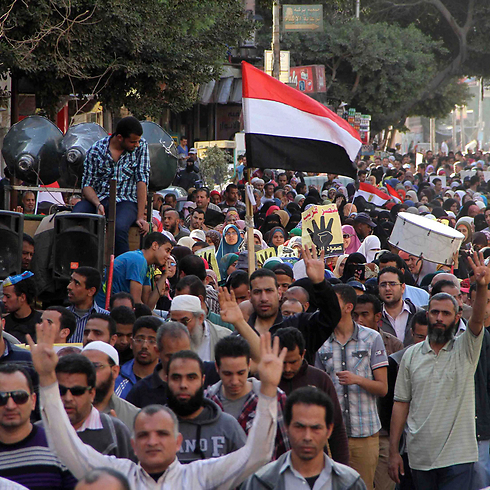 Muslim Brotherhood supporters in Egypt (Photo: Reuters)
The wave of mass trials is the latest phase of the heavy crackdown waged against supporters of Mohammed Morsi since his ouster. At least 16,000 people have been arrested – and hundreds killed –including most of the leadership of his Muslim Brotherhood. The trials have raised criticism from rights groups, particularly after one court sentenced more than 500 to death after a trial that lasted only two sessions. The military-backed interim government has branded the Brotherhood a terrorist organization, alleging it has plotted violence since Morsi's removal. The Brotherhood denies the claims, saying the prosecutions are intended to give a legal veneer to what they call a coup that removed an elected president. Badie is a defendant in a number of trials, including one mass tribunal of hundreds of defendants in the city of Minya, on murder charges that carries possible death penalties. One charge in the current trial – forming a group that uses terrorism – could also carry the death penalty. On trial with him in the case that opened Tuesday are several Brotherhood spokesmen, including Gehad el-Haddad, the group's main spokesman to Western media, as well as a dual US-Egyptian citizen, Mohammed Soltan, who is the son of prominent Brotherhood member Salah Soltan and has been on hunger strike for over two months and was unable to walk unassisted. The trial's opening, which lasted nearly half an hour, was rowdy. As the judge entered the courtroom, the defendants sang the national anthem, and chanted: "Free men are in prison cells. Revolutionaries are in the squares." When Judge Mohammed Nagi Shehata officially noted the disruption in court records, Soltan shouted from the cage that he can't hear. "Shut up!" Shehata brusquely snapped back at him – a break in judicial decorum that prompted further outcry from the defendants and their lawyers. In response, the defense lawyers asked the judge to recuse himself from the case accusing him of "humiliating" the defendants. The judge initially ignored their request, prompting the lawyers to withdraw from the courtroom. After a recess, Shehata adjourned the session to April 6 to allow the lawyers time to appeal to another court for his removal from the case. Lawyers say in recent judicial history, almost no such demands for a judge's recusal have been accepted, predicting that such tension with the judge would continue. Speaking during the recess, Badie derided his various trials, saying he faces a death sentence in a trial he never attended. For security reasons, Badie is not being taken to Minya for his trial there – meaning he is officially listed as "in absentia" in the case, even though he is in custody in a Cairo prison. "Is this law? Is this a judiciary?" he said. He called on judges not to accept that the profession be "insulted at the hands of some judges." He pointed to how one of his sons was killed in a police crackdown on protests, as was a daughter of another senior Brotherhood figure Mohammed el-Beltagy. "And then they accuse us of being killers. This is the real coup," he said. Another defendant, Mourad Aly, said the judge's outburst of "shut up" was the "theme of the times we are living in." "They want to muzzle us," he said from the cage. The defendants in the case are accused of running an operation that led to a campaign of violence after Morsi's ouster and falsified news to promote their cause. Prosecutors allege the campaign included attacks on state institutions and plans to kidnap el-Sissi and interim President Adly Mansour and set up an alternative government "by force." Prosecutors allege the defendants were running the operation out of Rabaah el-Adawiya, the main pro-Morsi sit-in, named after the Cairo mosque where thousands of Islamists camped out for weeks after his ouster. Protests that turned violent and left dozens dead stemmed from the sit-in. Security forces stormed Rabaah and another Cairo sit-in camp on Aug. 14, killing more than 600 people. They accused the Brotherhood of arming participants at the sit-ins and using the camps as a podium to organize protests around the country. The bloody dispersal of the sit-ins prompted a wave of retaliatory attacks on police stations, government buildings and churches that left hundreds more dead. Defense lawyer Mohammed el-Damati derided the accusations in the trial as concocted, noting that "there is no material act" of kidnapping el-Sissi to base the charges on. "These are just reports by some security officer sitting in his office. It can't be evidence," he said. In recent months, the crackdown on Morsi supporters has widened to include secular dissidents who criticize the government's lack of tolerance for criticism and a draconian law that restricts protests. The multiple trials have caused a backlog, with several often going on in court on the same day. Rights groups have called the acceleration of prosecution "selective justice," since no officials has been investigated for the killing of protesters since Morsi's ouster. Earlier Tuesday in the same courtroom, the judge Shehata heard the case of 269 non-Islamist protesters charged with attacking state institutions and police in connection to 2011 clashes with security forces outside the Cabinet building. At least 17 protesters were killed in the violence, and a government scientific institute was burned. The protest was against the military, which at the time was ruling Egypt after the fall of autocrat Hosni Mubarak. During the session Tuesday, one of the defendants raised a banner in the cage reading, "Egypt's honorable judiciary, beware of a stain on your forehead." Shehata ordered the detention of the defendant, who like most others in the case had been free on bail. "I swear to God, Hosni Mubarak is still ruling!" another defendant shouted as the session closed.