Washington - US Secretary of State John Kerry has spoken to both Prime Minister Benjamin Netanyahu and Palestinian President Mahmoud Abbas. His call came after Israel announced it will not release the fourth tranche of Palestinian prisoners and after Palestinains set forth a new list of demands, hinting talks are nearing collapse.

Tzipi Livni's spokeswoman said Thursday that the government was working to finalize an agreement to free the prisoners when Abbas signed letters of accessions to 15 international conventions.

Livni said the prisoner release was contingent on the Palestinians refraining from making unilateral moves and now that "new conditions were established, Israel cannot release the fourth batch of prisoners." 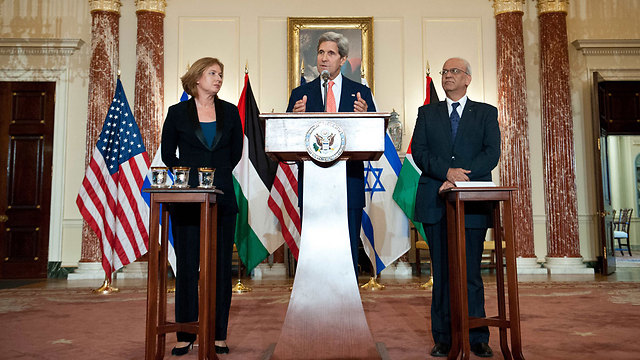 Speaking earlier Thursday during a visit to Algeria, Kerry called it a "critical moment" for talks

and said "You can facilitate, you can push, you can nudge, but the parties themselves have to make fundamental decisions and compromises."

Refrencing the adage that you can lead a horse to water but can't make it drink, Kerry said "Now is the time to drink... The leaders need to know that."

In Washington, State Department spokeswoman Marie Harf said that US officials "haven't been informed of any such decision" by Israel to call off the planned release.

White House spokesperson Jay Carney said "the decision... creates challenges, and there certainly is currently no agreement on the release of this tranche." The Palestinains slammed the decision, with Yasser Abed Rabbo, general secretary of the PLO executive committee telling AFP that " Israel has a habit of evading agreements and conventions it has signed... That is why conditions for future negotiations must change radically."

As a possible preemptive result, the Palestinians have compiled a new list of demands for the continuation of peace talks, ranging from the release of some 1,200 Palestinian prisoners to a written commitment by Israel accepting the Palestinian state along the 1967 border with East Jerusalem as its capital.

The list was presented during the firery meeting between Israelis and Palestinians but was leaked Thursday after Chief Palestinian negotiator Saeb Erekat and Mohammed Al-Aalul, a Fatah central committee member, presented the list to the PLO.

Elior Levy, the Associated Press, AFP and Reuters contributed to this report