Netanyahu: Willing to continue talks 'but not at any price'

The prime minister responds to the peace talks crisis for the first time, accuses Palestinians of deteriorating talks through one-sided actions; Israeli ministers slam other side, say 'Abbas is spitting in our faces'.

Prime Minister Benjamin Netanyahu, in his first public comments on a crisis in US-brokered peace talks with the Palestinians, said on Sunday Israel was prepared to continue negotiations but "not at any price".

Netanyahu noted that "will achieve a state only through direct negotiations and not through empty proclamations or unilateral moves, which will only push a peace accord farther away."

The prime minister further noted that "throughout these talks, we have taken tough steps and demonstrated willingness to continue executing difficult in the upcoming months as well to create a framework to allow ending the conflict.

"Unfortunately, as we approached the talks' deadline, the Palestinian leadership rushed to unilaterally join 14 international treaties. Thus the Palestinians significantly violated the agreements that were achieved. The threats to turn to the UN do not affect us. The Palestinians have plenty to lose in a unilateral step."

Earlier, Economy Minister and Bayit Yehudi Chairman Naftali Bennett slammed the Palestinians and said that "they shut down the negotiations by unilaterally going to the UN against all agreements. This is a flagrant violation of the accords, including the Oslo Accords. The negotiations with the Palestinians, even though they only turned unilaterally to the UN, makes the State of Israel a shelter for extortion. 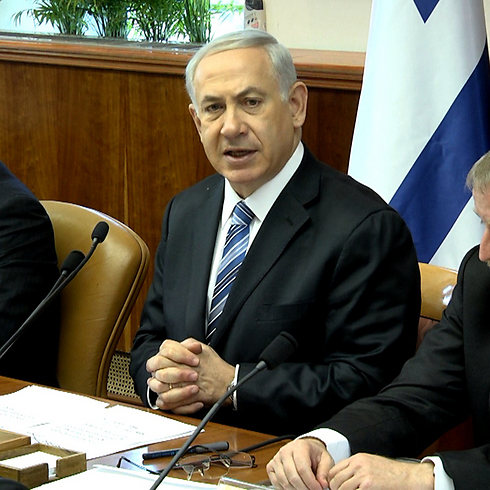 "If the seller runs off with the merchandise, you don't need to chase him – cash in hand – begging to buy his goods. In short, if they retract the UN application we'll negotiate, and if they don't the negotiations must stop."

Strategic Affairs Minister Yuval Steinitz joined the critical remarks against the Palestinians, and said: "Truth be told, Mahmoud Abbas is spitting in our faces, he tells us he is not interested in peace, he is willing to recognize the existence of the Jewish people and its right to its own state, and now he shuts down the negotiations.

"The Palestinian Authority exists thanks to us. Not only because of the Oslo Accords, but because of the funds we transfer them, and the security we give them. Otherwise, Hamas and Islamic Jihad, as they control Gaza, would also take down Abbas and take over Ramallah."

In light of the American threat to stop mediating the negotiations, another meeting between chief Israeli negotiator and chief Palestinian negotiator Saeb Erekat will be held Sunday, together with American envoy Martin Indyk.

In an interview with Israeli Army Radio, chief Palestinian negotiator Saeb Erekat bridled at calls by some of Netanyahu's cabinet ministers for economic sanctions against the Palestinian Authority, which exercises limited self-rule in the West Bank.

"Why are you threatening us as if we are sending suicide bombers to Tel Aviv?" Erekat asked.

In the West Bank city of Ramallah, Safa Nassereldeen, the Palestinian minister of telecommunications, said Israel had informed a cellular phone company, Wataniya Palestine Mobile, it would no longer be allowed to bring equipment into the Gaza Strip, where it plans to operate a network.

Israel, which imposes tough restrictions on the passage of people and goods across the Gaza border, had permitted the company - owned by the Palestine Investment Fund and Kuwait's National Mobile Telecommunications Co - to send hardware into the Hamas Islamist-run territory after the peace talks with Abbas resumed in July.

Nabil Abu Rdainah, an Abbas spokesman, said Israel that was taking unilateral steps through its continued settlement activities in disputed territory Palestinians seek for a state and its failure to release the prisoners.

Since Wednesday, the Israelis and Palestinians have met twice, and dozens of additional calls were held through US mediation, in an attempt to formulate a new way to return the sides to the negotiations table. By the expected Sunday meeting, a message will be sent to US Secretary of State John Kerry, who is expected to meet with President Barack Obama. The two are expected to deliberate on the status of the negotiations and decide on the future of the US-led effort.

Obama's intervention in the talks, after months of letting Kerry lead the effort unaided, raises doubts in Israel regarding a possible withdrawal by the Americans from their commitment to the peace talks.

"This time it's serious, it's not a show. The Americans are examining the possibilities standing before them and they need to make a decision. It affects both us and the Palestinians, and so we have to find a way to not end these negotiations," an Israeli official explained.

Attila Somfalvi, the Associated Press and Reuters contributed to this report.