JERICHO — Palestinian women in combat fatigues and headscarves rappelled down a six-story tower, fired assault rifles at imaginary terrorists and in a drill straight out of the movies bundled a would-be VIP into a car and sped off after a shooting.

The 22 future commandos are trailblazers in a still largely male-dominated society, set to become the first female members of the Presidential Guards, a Palestinian elite force of 2,600 men. Their inclusion is the result of gradual changes in the West Bank in recent years.

Some gender barriers have fallen, with a few women assuming posts as mayors, judges and Cabinet ministers or starting their own businesses. At the same time, unemployment is on the rise, and families are more open to women entering non-traditional jobs if it means another paycheck. 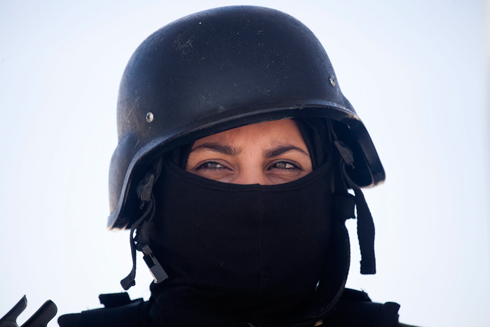 Photo: AP
Women make up just 3 percent of 30,000 members of the Palestinian police and other security agencies in the West Bank, but there's a push to recruit more, said Brig. Rashideh Mughrabi, in charge of gender issues in the National Security Forces. 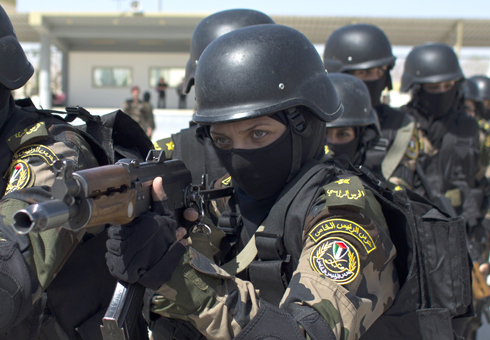 Photo: AFP
For graduate Kurum Saad, the appeal was immediate. As a female officer, her traditional role would have been in administration, but she wanted adventure.

On Sunday, Saad and the others in her group put on black combat boots, camouflage uniforms and pulled black ski masks over the headscarves to show journalists what they'd learned in their special training. 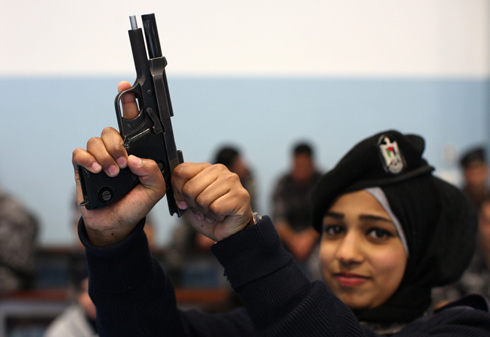 Photo: AFP
Several women, including non-swimmers, were asked to jump into a pool as a show of courage. They dove in in full uniform, including boots, and one had to be pulled out by a lifeguard. Six women, including Saad, rappelled down the six-story tower in pairs. Saad said she excels at sharp shooting but for months was terrified of heights. She said that during training in Jordan with local commandos, she overcame her fear. Sunday, she swiftly made her way down, smiling as she touched ground.

Saad said she relishes her role of opening doors for other women. Her father is proud of her and her little sister is eager to join the Guards, she said. 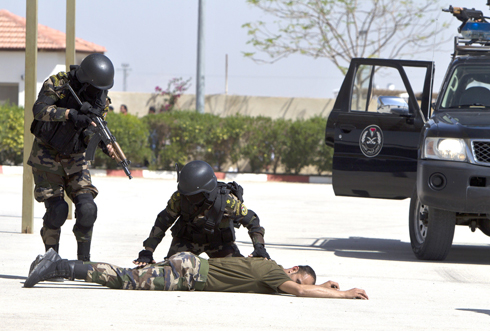 Photo: AFP
As the women performed their drills at the walled Presidential Guards training complex in Jericho — having been called back from a break for the occasion — hundreds of young men waited in line outside in the brutal desert sun.

They had responded to ads announcing the Guards wanted recruits, but faced a tough selection process, with only a few dozen of the tallest and fittest being chosen. 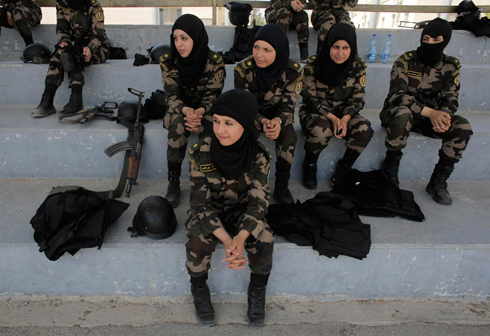 Photo: AFP
The Presidential Guards were established under the late Yasser Arafat, the globe-trotting Palestinian leader. Arafat spent most of his life in exile but returned to the Palestinian territories in 1994, as part of interim peace deals with Israel, and set up a self-rule government. Under Arafat's often-chaotic rule, various security branches grew in size, with often overlapping or competing assignments. After Arafat's death in 2004, the U.S. and Europe stepped in, training and equipping some of the units as part of an attempt to rein in vigilantes and militants. For now, the female Guards are only being drawn from the West Bank. In the Gaza Strip, which is not under Abbas' control and is ruled by the Islamic militant Hamas, about 400 women serve in the 16,000-strong security forces. They have undergone some training, including in martial arts, but work mostly in administrative jobs, including as border control officers and an anti-drug unit. The Palestinian security force training was meant to help prepare the people for statehood, yet independence remains elusive, with the latest U.S.-led mediation mission appearing to be on the verge of collapse. Some of the new female Guards say they believe they are serving their homeland, but in the short term there's also the draw of travel and adventure. On Sunday, they filled out European visa applications for a training session in Italy. Meanwhile, Italian and French trainers are to come to Jericho to teach them stunt driving and more personal protection skills. The women are to start work at Abbas' compound in the West Bank city of Ramallah in the summer. They'll live in separate quarters from those of the men, but their work will be the same: personal protection, especially if there are female dignitaries or wives of male visitors. Rami Sammar, 23, one of their male colleagues, said he's watched the women train and is impressed. "The way I see them, they are performing no less than us, the guys," he said.