A mortar rocket launched from the Gaza Strip exploded in a community in the Sha'ar Hanegev Regional Council in the Gaza parameter area Wednesday. The rocket landed near the a swimming pool and caused damage to surrounding infrastructure. No injuries were reported and no alert siren was sounded. Local residents described hearing an immense blast which they said inspired quite a scare. Residents are requested to remain indoors for the meantime and refrain from reaching the blast site. 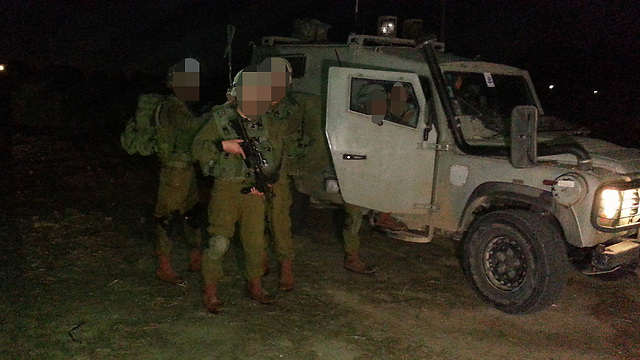 IDF forces on the scene (Photo: Roee Idan)
"This is a scary event, despite the quiet of recent days," a local resident told Ynet. "It caught of us off guard, because ussully there is some kind of an alert. Thank god this time it fell far away from residential areas where kids are running around.

Earlier Wednesday a 'Code Red' siren was heard in Hof Ashkelon Regional Council on Wednesday. The rocket that was fired from the Gaza Strip fell inside Palestinian territory.

Last Saturday the Israel Air Force attacked five terror targets in the Gaza Strip in response to a rocket fired towards southern Israel earlier in the day. An IDF statement said all targets were hit.

The rocket fell in an open field in the Hof Ashkelon Regional Council. No one was hurt from the rocket fire and no damage was caused.

Last month was scene to the latest round of escalation, when dozens of rockets were launched towards southern Israel over the course of two days. The IDF struck dozens of terror targets in response from the air and with artillery fire.

After two days, Islamic Jihad, took responsibility for the rocket fire and announced a truce. Following the shooting, Israel stationed Iron Dome batteries in Beersheba and near Ashdod.