Europe sees huge growth in anti-Semitic parties, with some winning as much as 20% of votes by taking advantage of massive immigration influx and the devastating financial crisis.

The rise of far-right politics in Europe reached new heights in last Monday's elections in Hungary when "Jobbik", the self-professed 'radical right-wing' political party which has often been accused of blatant anti-Semitism, won 20.54% of votes, making it the third largest party in the country and the single largest extreme right party in Europe.

Hungary however, is not alone. In the last decade, in particular in the wake of the EU's economic crisis and ongoing influx of immigrants into Europe, the continent's far-right parties' popularity have made dramatic leaps. "Anti-Semitism and xenophobia in Europe are always connected to citizen's financial difficulties," Professor of Political Science at Bar Ilan University Shmuel Sandler told Ynet.

Sandler, who is also a researcher at the Begin-Sadat Center for Strategic Studies, added that: "When life is hard, people look for someone to blame, and populist parties know how to use this momentum to ride the wave of racism."

"The large amount of immigration into Europe scares the local population, especially when coupled with  a low birth rate. There is a fear of letting in different cultures, different religions, and people who are generally different," said the professor. "Europe is mostly secular, and suddenly immigrants from whom religion is extremely important are coming in, for example Jews and Muslims. The far-right hates everyone, and their hatred of foreigners manifests differently for different groups." This is a review of the strongest and most prominent far-right parties in Europe.

The right-wing party "The Finns", born out of the party "The True Finns", was founded in 2005 and rose to popularity in Finland's 2011 elections when it garnered 19.1% of the vote (or 39 seats in the Finnish parliament). It is led by Timo Soini, and the win made Soini's "The Finns" the third largest political party in the country. 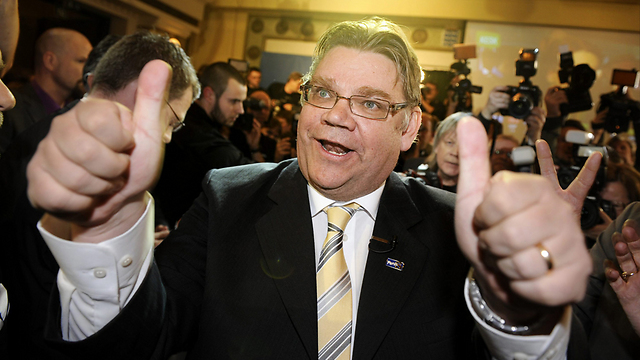 Leader of "The Finns" Timo Soini (Photo: AP)
The massive victory of "The Finns", a party that advocates opposition to the European Union, immigrants, NATO, and international aid, surpassed expectations at the polls on election day and caused the collapse of the Finland's political center. Soini, the party's leader, was one of the loudest opponents to the EU's austerity package to bail out Portugal from its financial crisis. Party members also voiced their opposition to circumcision and in 2012 called for a ban on the practice. In October 2013, however, "The Finns" expelled party member James Hirvisaari from their ranks for taking a picture with a friend in which they can be seen making a Nazi salute in parliament. "We don't need the kind of publicity that this MP brought upon us," said the party's deputy chairman said. Hirvisaari was also fined in 2001 for comments he made against Muslims which were decried as hate speech.

The far-right "Freedom Party of Austria" led by Heinz Christian Strache, won 22% of the votes in the country's last parliamentary elections.

Strache took control of the party in 2005 and then-leader Jorg Haider left its ranks to create an additional right-wing group called the "Alliance for the Future of Austria" (BZO) which directly competed with Strache's "Freedom Party of Austria" in the elections. 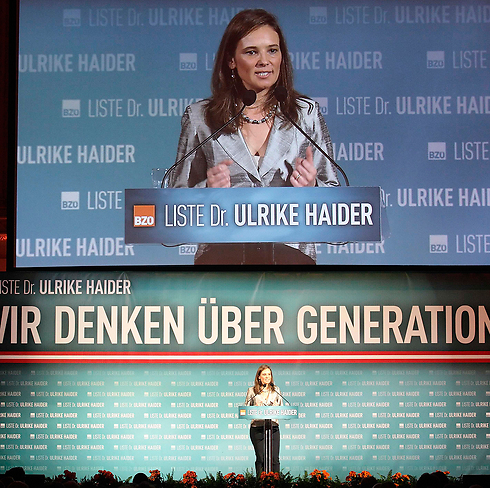 Ulrike Haider-Querica will run in European elections (Photo: Reuters)
Both parties gained significant support in the polls thanks to an aggressive anti-immigration campaign they waged.

Though after Haider's death in a car crash, support for his extremist party greatly diminished. In last year's elections the BZO lost its place in the Austrian parliament.

The party recently announced that Haider's daughter, Ulrike Haider-Querica, will be the BZO's leading candidate in European Parliament elections to be held in May. Jorg Haider was a controversial figure within Austria itself, and in the world abroad he drew condemnation from many different countries, including Israel, because of his anti-foreigner comments and what often appeared to be support for the values of the Nazi party. In the last few years of his life however, Haider seemed to make an attempt to avoid making such comments.

In a recent interview with an Austrian paper, his daughter Ukrike Haider said: "My father was a controversial man who stepped out-side the conventional box of politics in Austria. He was very popular but also had to deal with tough criticism," and the price she says is usually paid by his daughters.

Explaining the claim, Haider explained that she had not been allowed to pursue a specialization in European law because of her family connection.

The "National Front" party in France led by Marine Le Pen is well known for its opposition to the European Union, as well as immigration. The party won control of 11 towns in local elections held just last week.

Most of the towns that voted for the "National Front" in elections are located in the south of the country where anti-immigrant sentiment is strongest, but the party also made gains in support in some northern and eastern towns where homegrown French industry has been suffering. 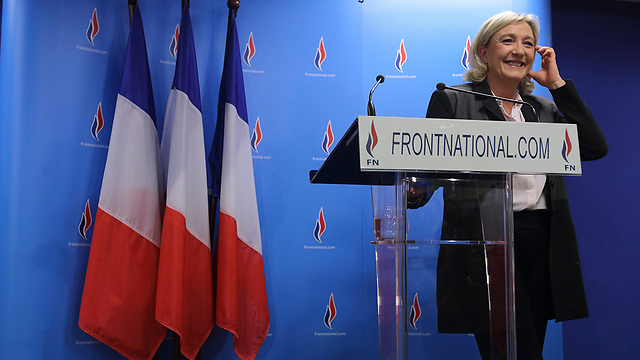 Marine Le Pen called for a ban on all religious head coverings including the Jewish Kippah (Photo: Reuters)
"The results prove that we can win on a large scale," Le Pen told reporters after learning of her party's impressive win in municipal elections. Her first move after the party's success in the election seemed to target Jews and Muslims. In an interview with RTL radio Le Pen said France would no longer provide non-pork meals for schoolchildren, claiming Kosher and Halal meals at schools go against the Christian values of the French nation. "We won't accept demands of our school's menus for religious reasons. There's no reason that this should be part of the public view. There are laws for that," said Le Pen. In 2012 Le Pen called for a nation-wide ban on religious head-covers. When she was asked in an interview with "Le Mond" if the ban should include the Jewish skullcaps, Le Pen replied, "Of course if veils will be banned then the Kippahs should also be banned in public places." Le Pen won the leadership of the "National Front" in 2011 and has since expanded its business in the hopes of not being perceived by the public as a one-ticket party, as was the case during the days of her father, Jean-Marie Le Pen, when the party focused on immigrants. Le Pen's father was heavily condemned for his denials of the Holocaust. As of late, Le Pen is leading the far-right's bid to address issues of high unemployment, cost of living, and rising crime in the country.

"Golden Dawn", the far-right political party in Greece, won 18 of 300 seats of parliament in 2012 after receiving more than 6% of the vote, thus entering the Greece's house of representatives for the first time.

The party success was premised on exploiting Greek disappointment at the country's large political parties, who were unable to save Greece from a massive financial recession. 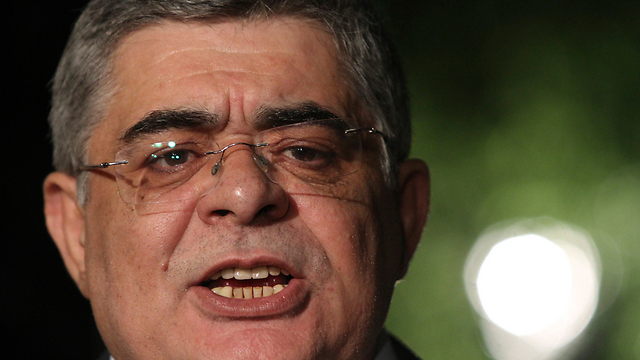 The party, which has already been called neo-Nazi and fascist, was connected to a number events generally labeled as hate crimes. The worst of these, was the murder of the popular, leftist Greek musician who was suspected of being killed by a party activist.

The arrest of Michaloliakos shortly after the incident was not the end of the party's woes, and last October the Greek parliament voted to end public funding of the party, and moved to eliminate the political immunity enjoyed by its six MPs. More over, the government has officially labeled "Golden Dawn" as a criminal organization.

In November, two party members were shot dead outside of party headquarters in the suburbs of Athens.

Besides "Golden Dawn", Greece is also home to organizations aligned to the far-left of the political map to which are attributed a series of attacks that killed a journalist and two police officers.