An Israeli man was killed and a woman and child were wounded Monday evening, when Palestinian gunmen opened fire on Israeli cars near the West Bank city of Hebron. Police spokesman Micky Rosenfeld said the people were members of the same family, travelling to a Passover Seder.

The 40-year-old man was critically hurt in the attack and received CPR at the scene, but succumbed his wounds. Two other people were wounded - his 28-year-old wife, who was moderately hurt, and a nine-year-old boy who sustained light wounds.

Police said that the gunfire, which came from an automatic weapon, had hit the car as it traveled on Route 35, at the junction leading to the village of Idhna.

The attack is understood to have targeted several vehicles. The IDF launched an massive manhunt in the area in the wake of the attack. Troops surrounded Idhna, suspecting that the gunmen came from the village, and later entered the village itself. Palestinian sources said that large numbers of IDF troops had set up roadblocks at the entrances to Palestinian villages in the Hebron area. 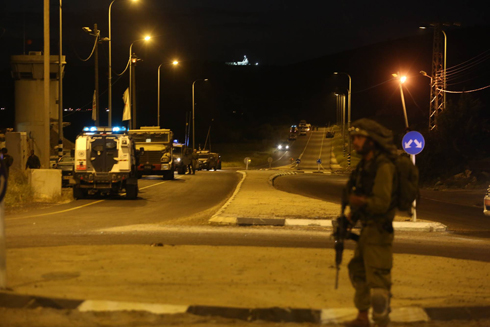 IDF troops in the area of the attack (Photo: Gil Yochanan)

A Magen David Adom paramedic who treated the wounded at the scene said that the man and the woman had been travelling together, while the child had been in a separate car.

"A number of cars were fired at near the Tarqumiya checkpoint," he said. "There were no casualties in the first car, in the second the driver was critically wounded, a 40-year-old man who was pronounced dead after rescucitaion efforts failed. In the seat beside the driver was a young 28-year-old woman who was in moderate condition after she was shot in the upper body.

An Israeli travelling in the first car that came under fire told the Tazpit news agency that at least one the gunmen had been visible from the road.

"We were driving along the road crossing Judea and we saw a terrorist standing by the side of the road, armed with a Kalashnikov and wearing a helmet," he said. "He opened fire but didn't hit us."

"He kept firing at the cars behind us," the man said. "When we saw the police we signalled that there was an incident and there was shooting. We kept going until we saw soldiers at the Tarqumiya junction, where we stopped and blocked the road so no one else could drive down there."

Hamas and Islamic Jihad both praised the attack, although neither organization claimed responsibility.

Before Monday, the most recent West Bank shooting attack was in January, when a gunman opened fire on a military post in the Ramallah area. Troops returned fire, killing the gunman.

In 2002, a suicide bomber blew himself up at the Seder meal at the Park Hotel in Netanya, killing 30 people and wounding dozens more.

Elior Levy and Ilana Curiel contributed to this report.